Hillary Clinton fashion style leaves enough kidding in press and in social net works. Her style is called “the style of a lesbian” and Hillary Clinton pantsuit was criticized by the fashion guru Anna Wintour. But Hillary Clinton managed to make such a wonderful career due to her ability to be positive and not to pay attention to rumors around her. So what can we say about Hillary Clinton clothing and how has her fashion style been changing during the years of her career? Let’s analyze! 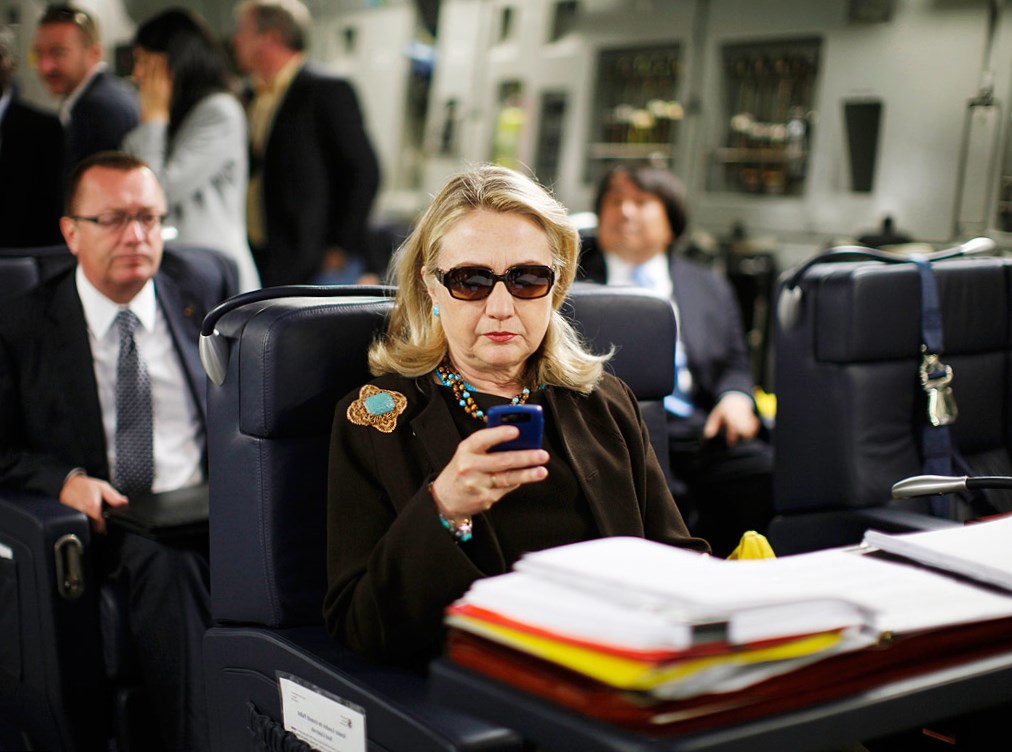 Hillary Clinton is a successful politician and she dresses according to her position. The main aim of sixty eight year old woman is to show her strength and her competence, not to look sexual. That’s why mostly she wears pantsuits of conservative colors like red, blue or white. Her pantsuits are the subject for various Internet jokes and sometimes she joins them and laughs at herself too. 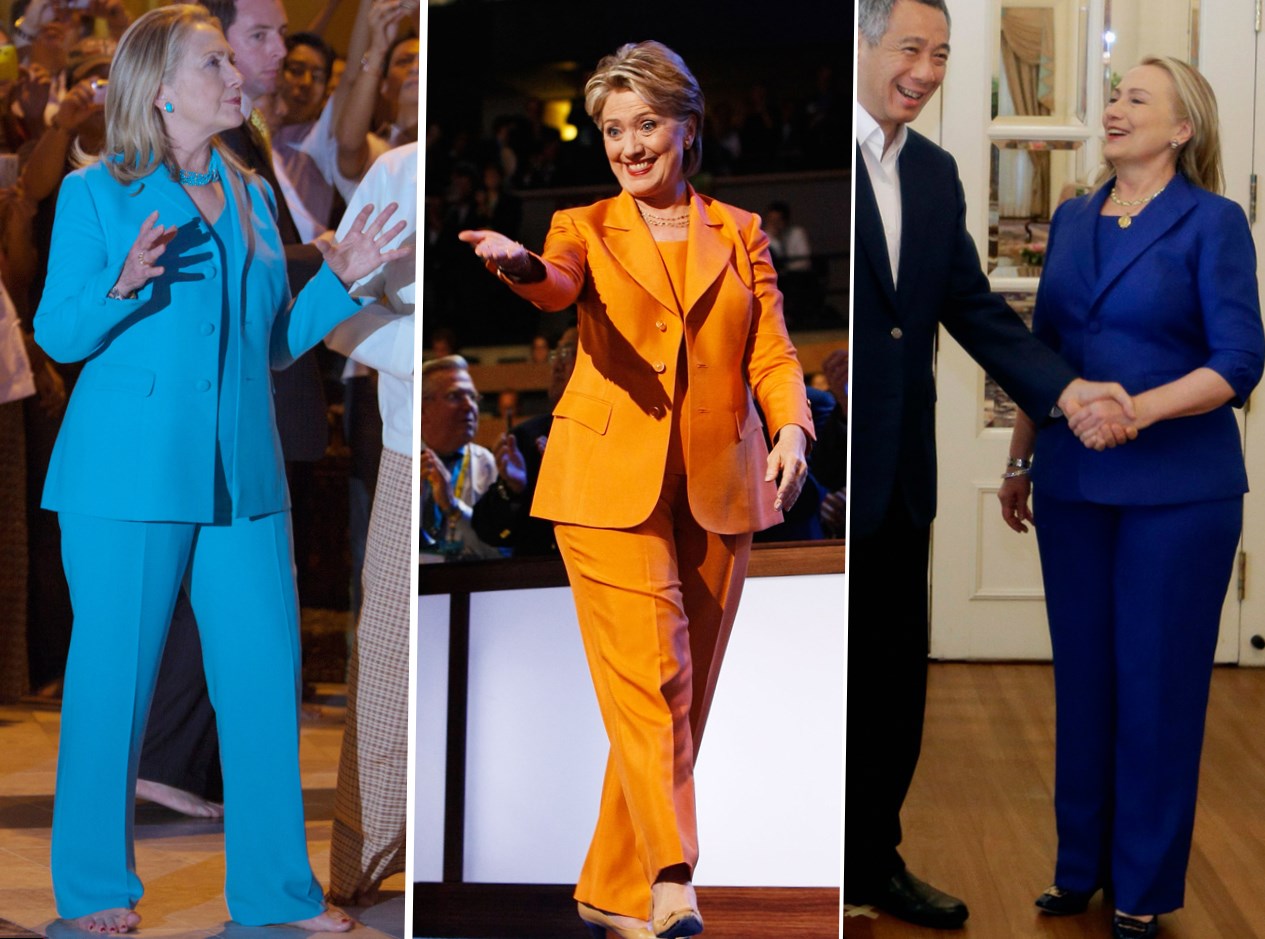 Anna Wintour advised the candidate for Presidency Hillary Clinton to try changing her pants into skirts of middle length and long dresses. Thus still she will look professional and respectable and at the same time she will add some femininity to her appearance. Vogue chief editor Anna Wintour thinks that Hillary Clinton skirt suit – if she dares to wear it – will add her some extra votes. 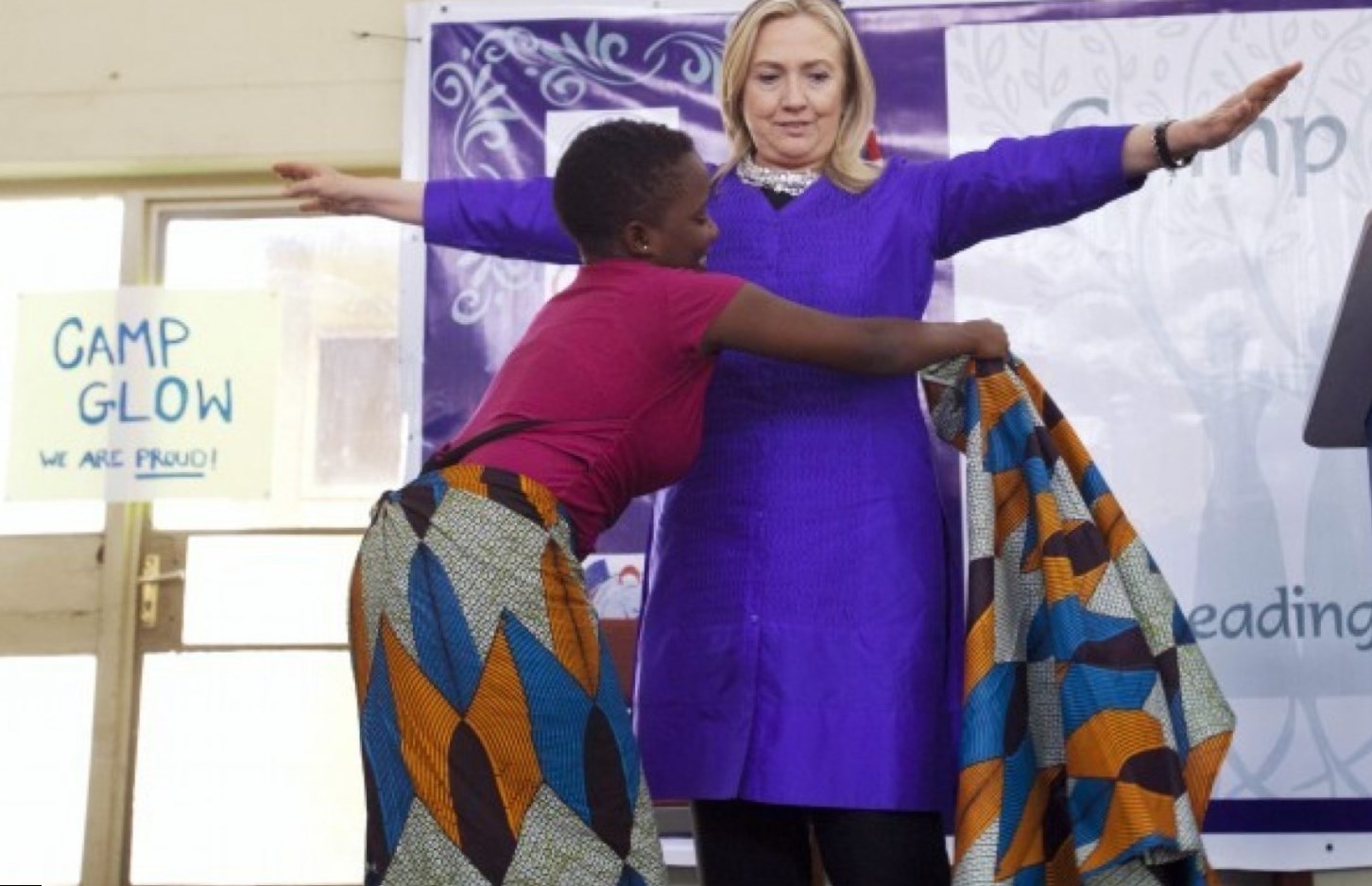 But Hillary Clinton, who looks neat and solid all the time, had never cared about her appearance. Even when she was much younger and was much slimmer, she wasn’t interested in fashion and directed all her energy to achieve her career peaks. Let’s consider the evolution of style of Hillary Clinton through years. 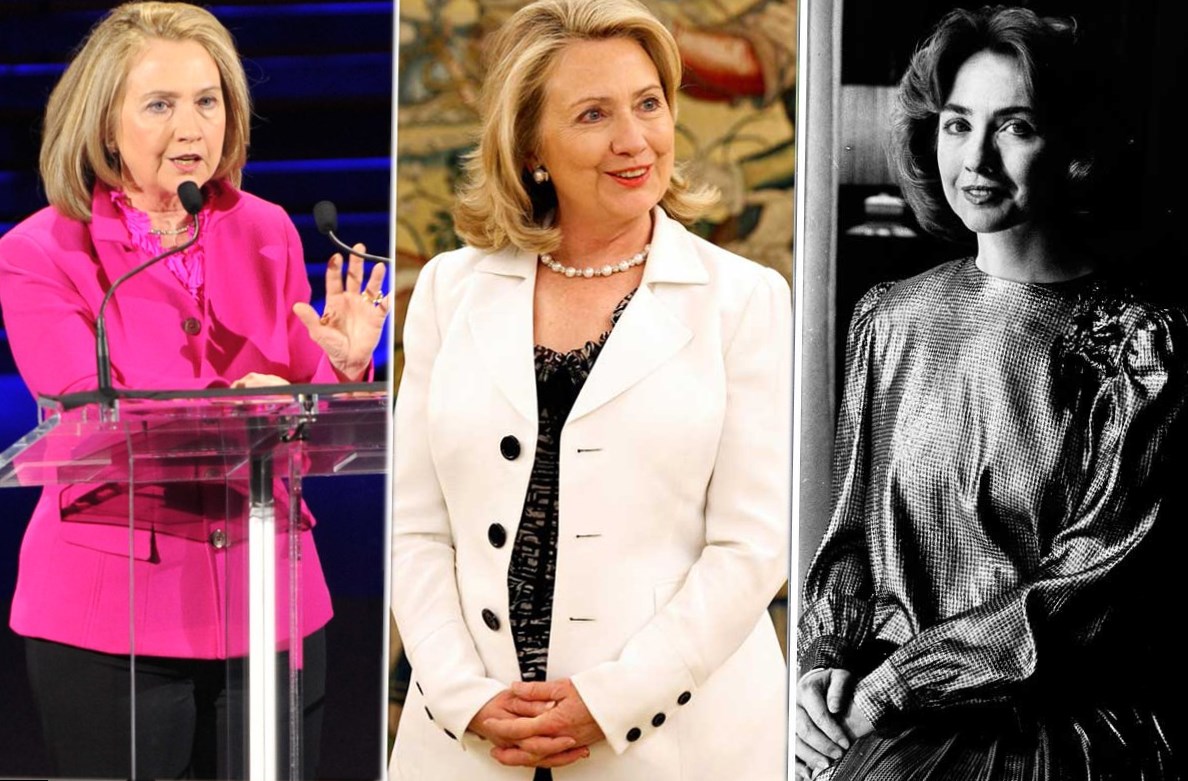 Hillary Clinton was an active student. She had her own political views and was ready to protect them. Among the other students she was a leader, who organized strikes and who gave interviews for the local newspaper. A young woman Hillary Clinton seemed not to care about her appearance at all.

She wore simple clothes, striped pants or jeans, baggy sweaters. Her hair of natural light brown color was long and straight. She had never colored it and didn’t want to make any special hairdo. She let her hair down or made a donut bun. And Hillary used to wear glasses. 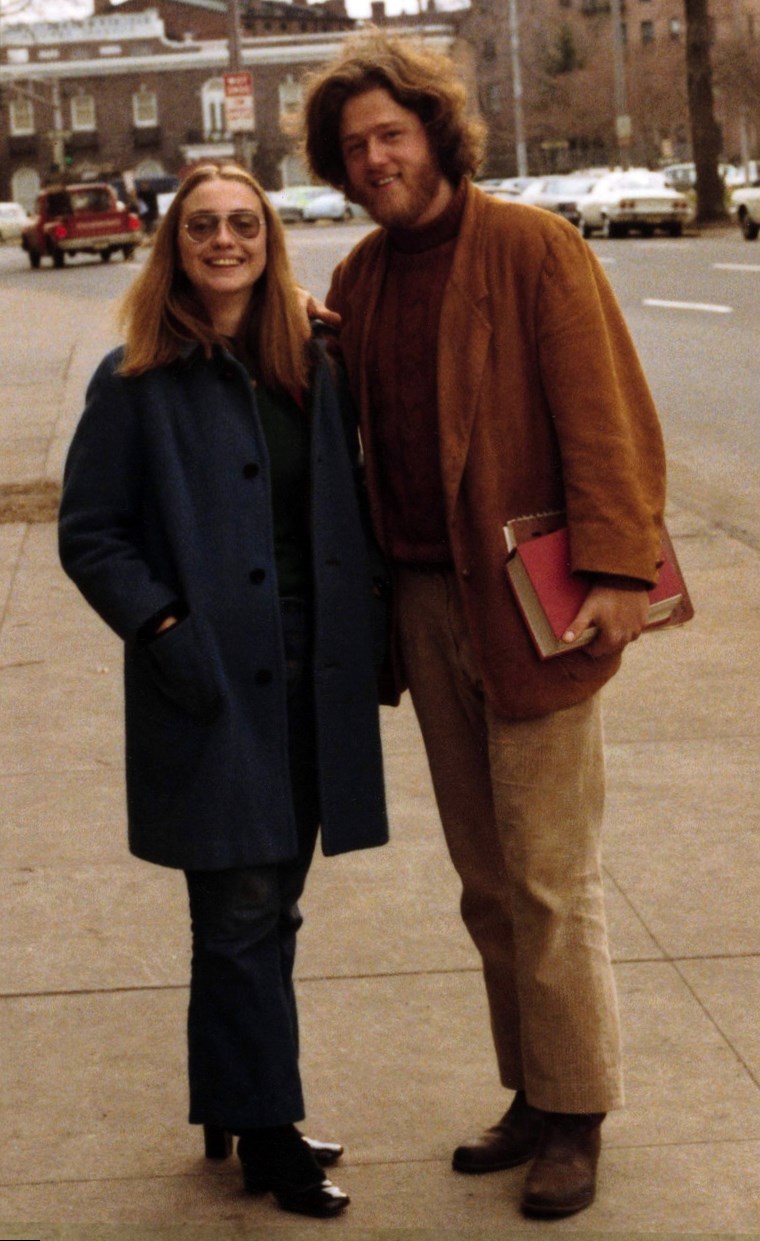 At the age of 25 Hillary Rodham became Mrs. Clinton. A young wife, Hillary, used to be slim and pretty. During their honey moon she used to wear shorts and T-shirts and looked fresh and so young. Still she wore glasses and didn’t color her hair. The future First Lady didn’t like bright colors. She hated make up and didn’t use it in her everyday life. 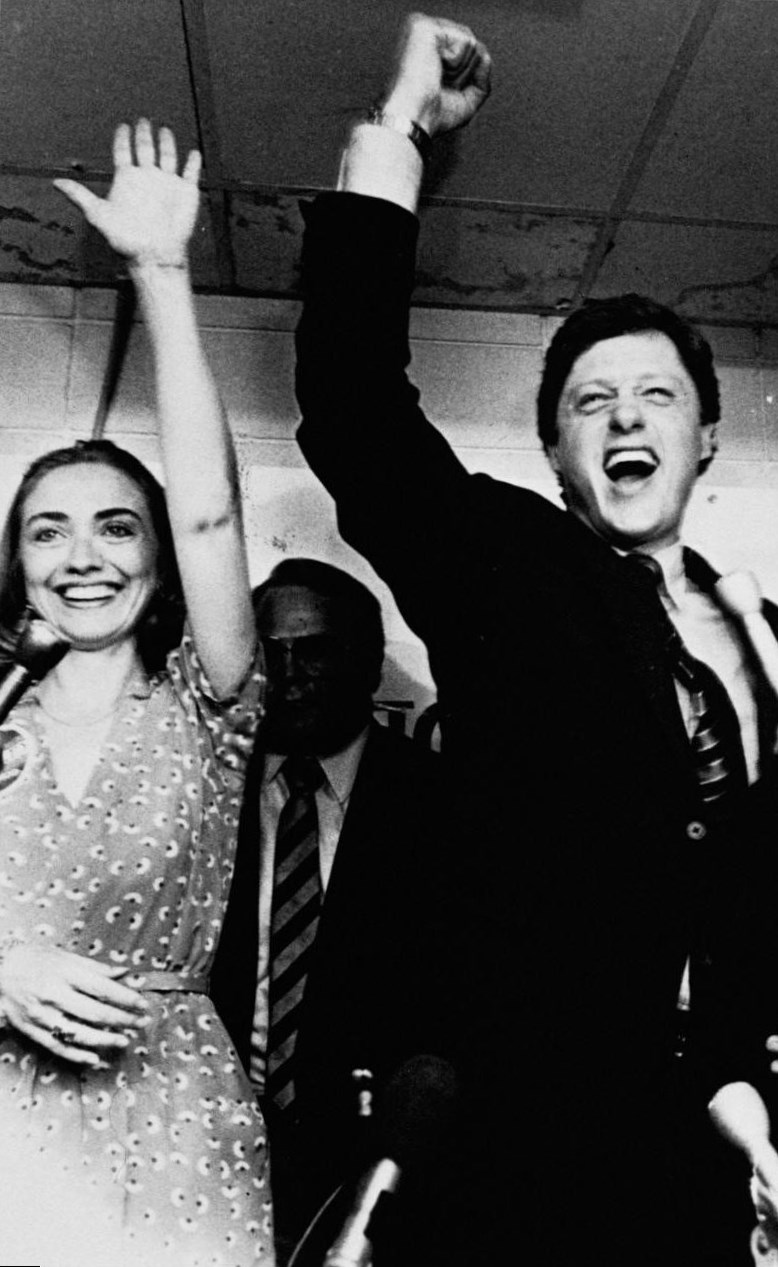 In 1992 a wife and a mother Hillary Clinton became the First Lady. It was the time to change her image as her new position was too responsible to wear jeans and shorts. She refused from her huge glasses. But it was not enough for her. Soon Hillary made a stylish haircut and changed her wardrobe. She bought numerous pantsuits of bright colors – green, blue and red. 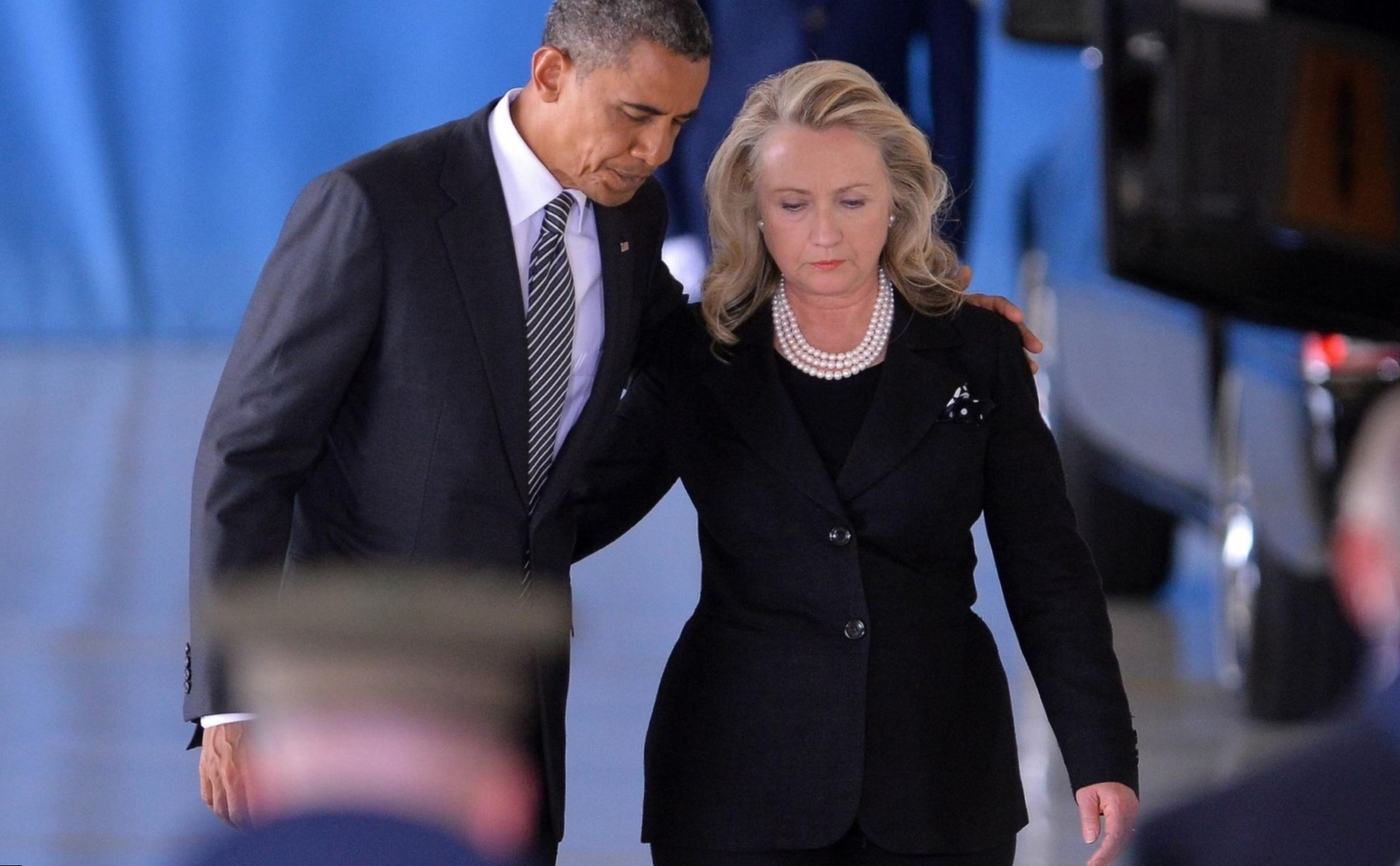 The First Lady started to use makeup – she preferred beige eyeshades and light red lipstick. Eight years later Hillary Clinton was involved into a scandal with Monica Lewinsky. She showed the sample to numerous women, who appeared in the same situation, of being calm, full of dignity and self-control.

But her style of clothing showed her anxiety. The First Lady changed green and blue suits into more neutral white and beige. She started to care about her appearance much more carefully, like any woman, who was cheated by her husband. She made a facelift. 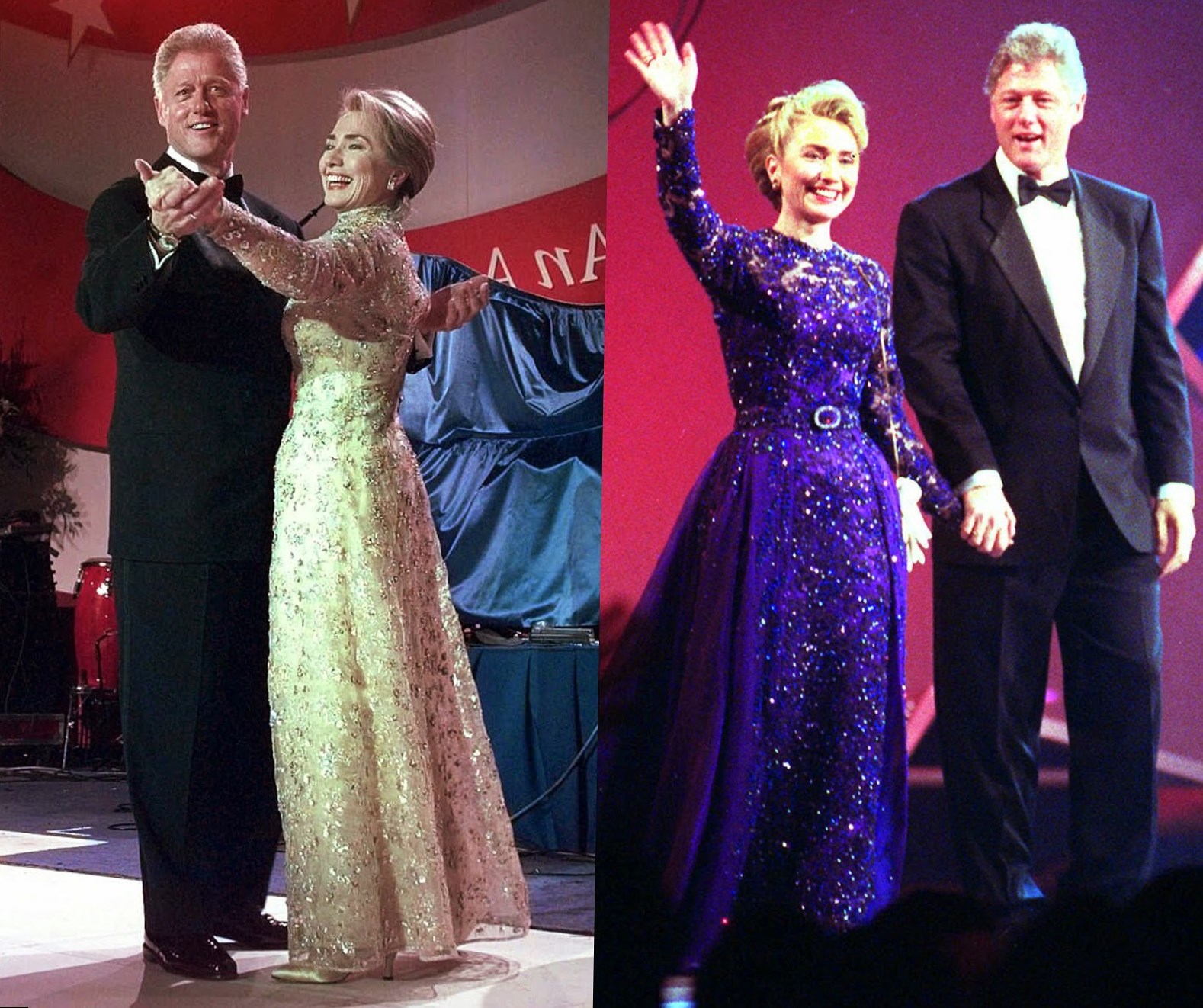 When Hillary Clinton was offered by the new President Barack Obama to become United States Secretary of State, she started to gain her weight. And not only as a politician, but also as middle aged woman. She fell in love with pantsuits as they covered her plump thighs. She preferred classical shoes with middle sized heels. Thus her legs seemed slimmer and longer. Most of fashion designers advised the Secretary of State to wear a dress occasionally. But she ignored their advice. Only once her fans managed to see Hillary Clinton dress. She put it on in 2010 for her wedding anniversary. Bright green long evening dress looked great. Professional makeup made Hilary Clinton look like a TV star. 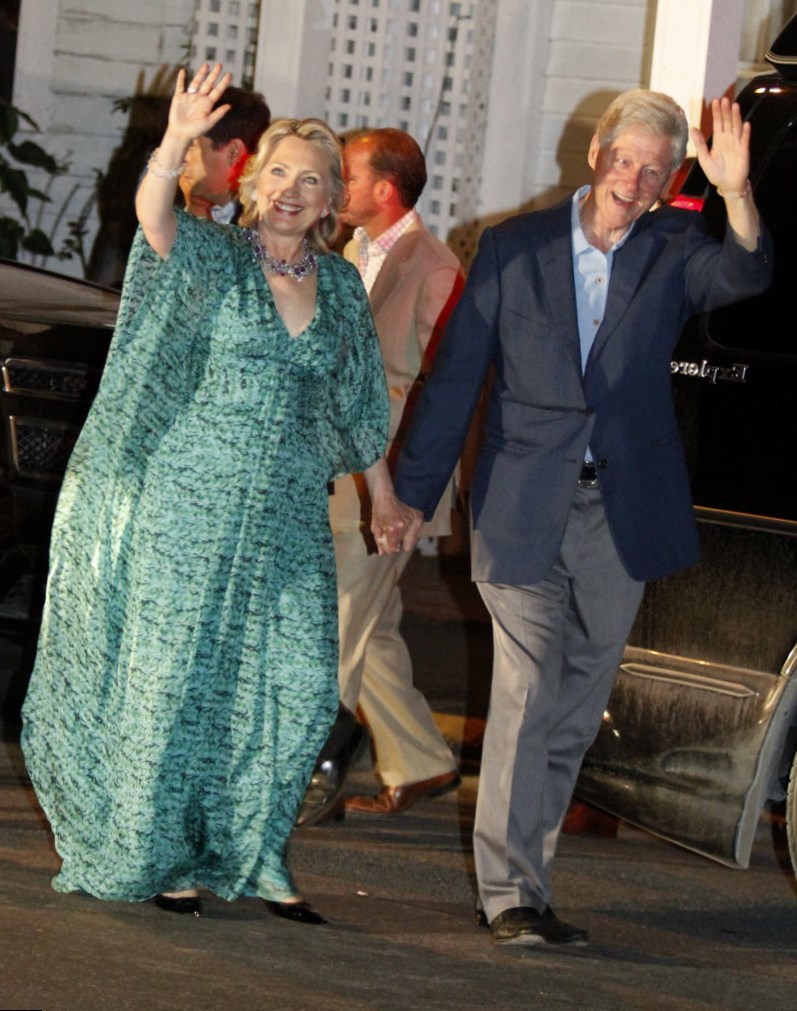 Now Mrs. Clinton is a candidate for Presidency. Strict business pantsuits are her visiting card for now. Hilary is 68 but she looks much younger, mostly due to successful plastic surgery. 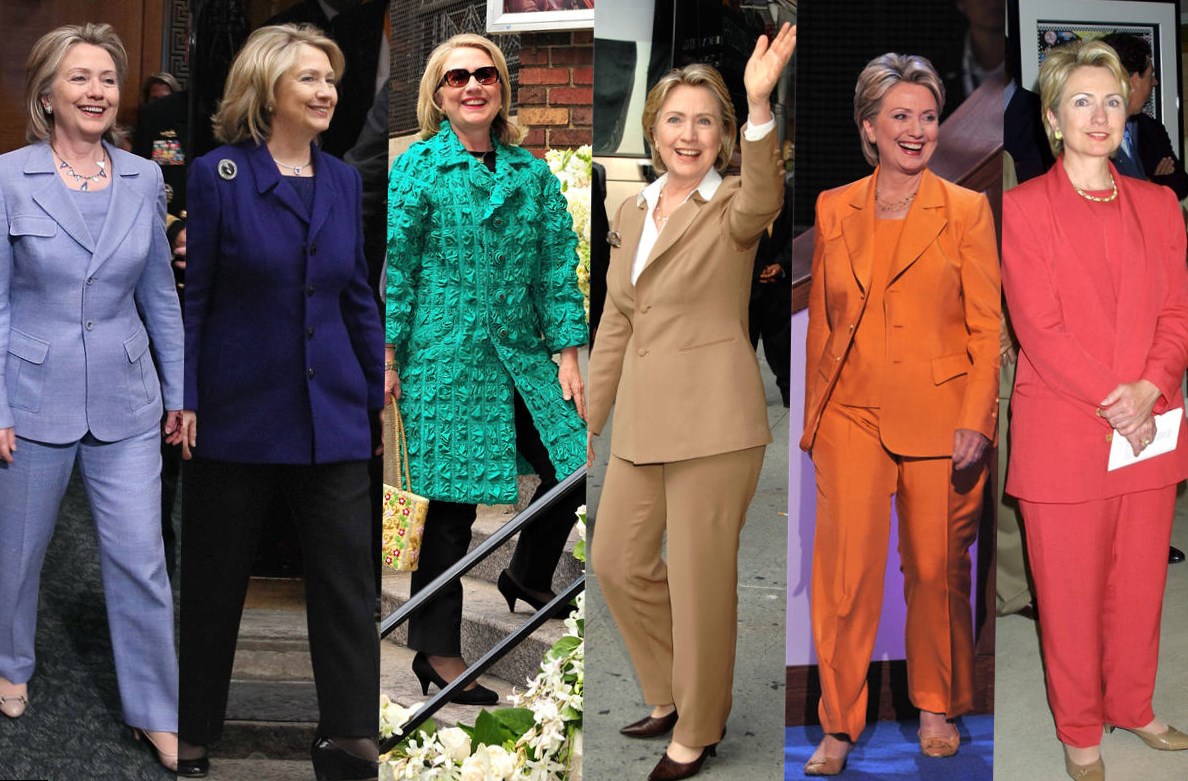 What is about Jewelry?

Hillary Clinton is not a woman of fashion, but she tries her best to look neat and elegant. She doesn’t like a lot of jewelry, but always wears one or two items. She prefers pearls and diamonds, like a real lady. Sometimes she wears earrings made of white gold. The candidate for Presidency never wears more than two items of jewelry for one time. 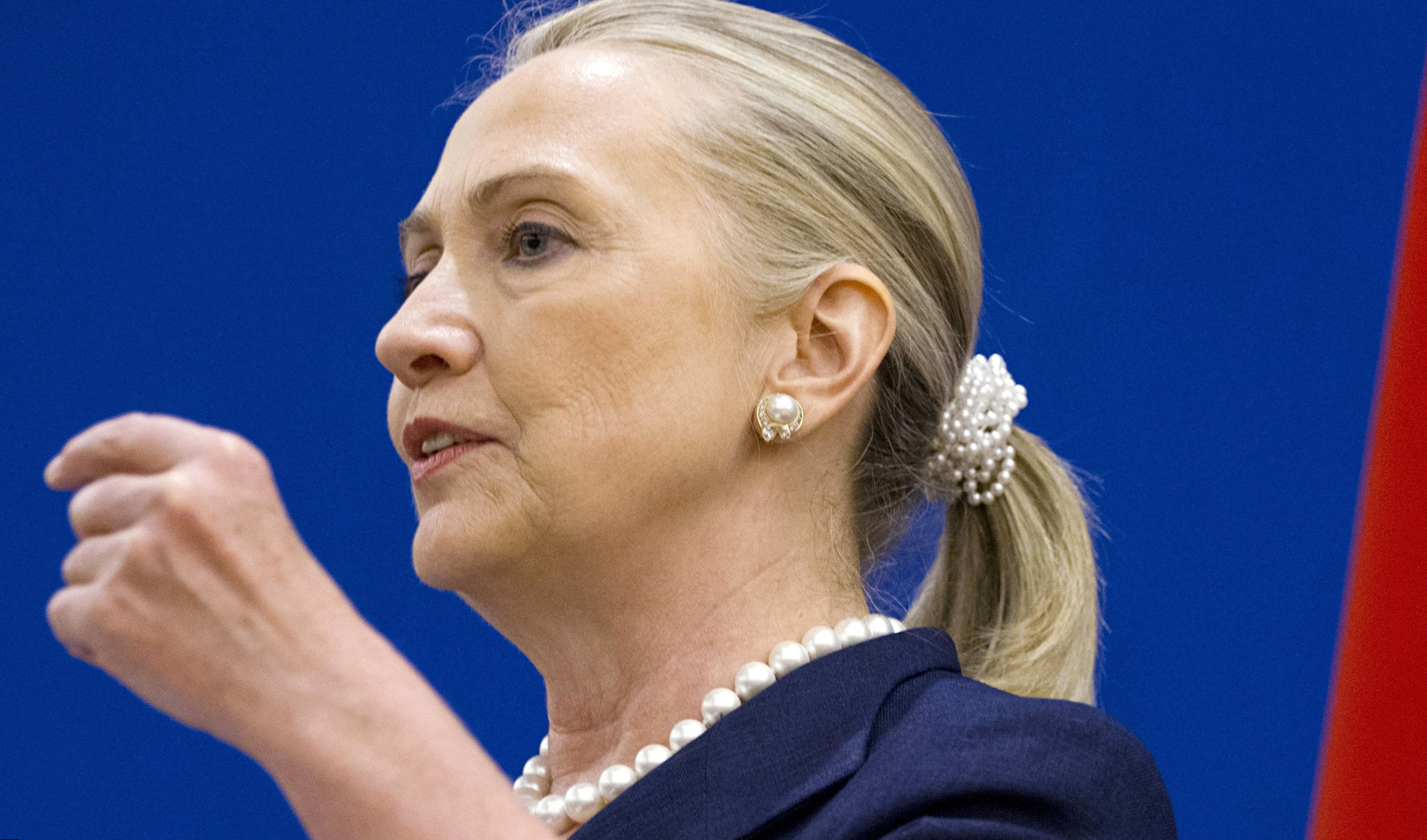 Like any other woman, Hillary Clinton has her favorite perfume and wears several drops of it every day. She likes Angel Thierry Mugler. The sweet vanilla aroma seems too heavy for many women, but not for strong willed Hillary. 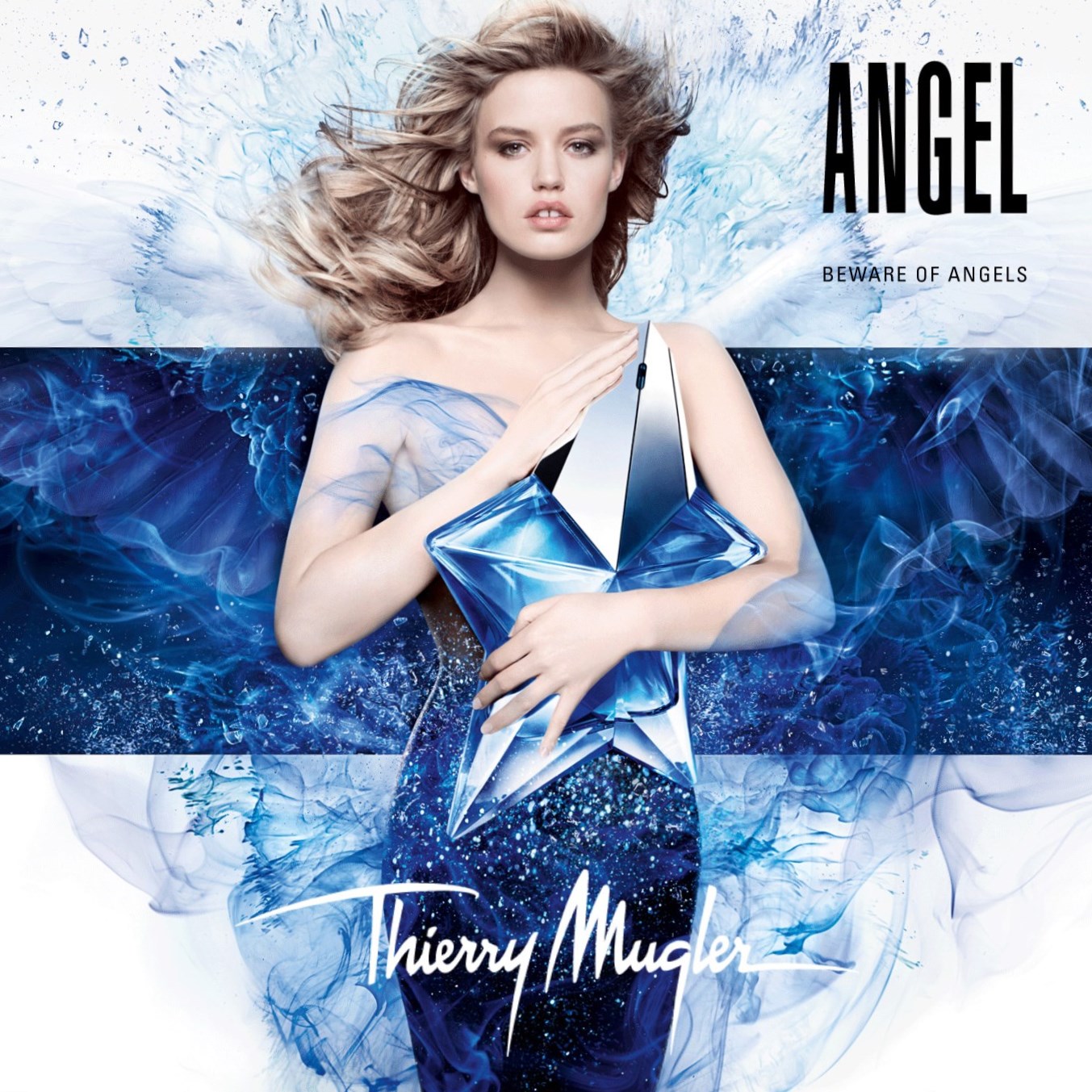 She has made a wonderful career, she brought up a daughter and she kept her marriage. The style of Hillary Clinton is a style of a strong woman with all her advantages and disadvantages.