Salma Valgarma Hayek Jiménez-Pinault is the real name of the world-known Hollywood actress, who was born in 1966 in Mexico in the family of opera singer with Spanish roots and manager of oil company with Lebanese descent. Salma raised in a wealthy and devout family, and at age of 12 was sent to the boarding school for girls in Louisiana, then at the age of 17 she moved to Mexico city and enrolled in the Institute, where she studied international relations.

At the age of 23, he got a leading role in the Mexican TV-series and starred in her first film for which received the Award. After 2 years, Salma moved to Los Angeles and began studying acting with Stella Adler. In 1995 Hayek starred in the film “Desperado” and gained fame and wide popularity.

Now Salma Hayek is an actress, director, producer and singer: the most successful Latin American actress in Hollywood, Hayek has appeared in more than 30 films. She is the first Mexican woman, which was nominated for The Oscars for Best Actress in 2003. 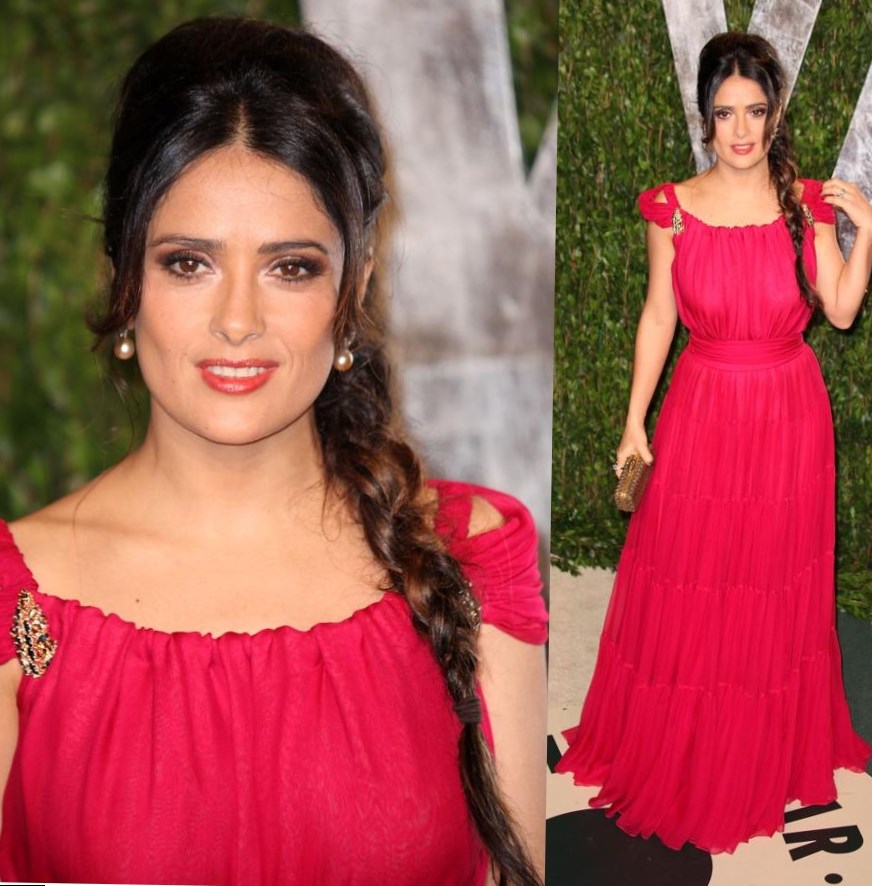 The star style of Salma Hayek has always been distinguished by the originality and the presence of bright parts in the correct clothing and tailoring of dresses. Her style doesn’t leave anyone indifferent, so in everyday life she prefers exclusively feminine manner, but appreciates the comfort. On the Red Carpet she regularly demonstrates bright outfits, correctly placing the emphasis with the help of accessories.

Salma appreciates the individuality and beauty, as she is the happy owner of the sexiest type of figure — hourglass, the main principles of her selection of clothing are: the base of a woman’s wardrobe should be dress; each look should have an accessory such as scarf, brooch or handbag. The true beauty and style can be shown by choosing clothes according to the type of figure.

Casual style of Salma from time to time is jeans, it’s a classic that is always up to date and the actress wears it with great pleasure. In combination with them Hayek always wears different tops, not hesitating a deep neckline. Most often she prefers such sensual fabrics like chiffon and silk. She loves all kinds of ruffles, bows, frills and many other cute items, however, only in moderation.

The actress prefers to wear seductive skirts and dresses even on a simple walk to identify women’s attractiveness and to emphasize the dignity. Salma clearly seeks the best length of her dresses— to the knee, emphasizing slim waist and beautiful breasts. The main rule in this outfit is the more complex and intricate pattern on the dress, the more simple should be chosen jewelry or accessories.

As about shoes she does not recognize the fashion of sandals, flip flops and etc., they are just not for her. Salma isn’t often seen in shoes with flat soles. But she loves shoes with high heels and stiletto heels, ankle boots chunky heel and often can be seen in the original shoes with custom heel and  decorations.

On the Red Carpet the actress prefers outfits exclusively from the finest materials and the most expensive brands, including Yves Saint Laurent, Bottega Veneta, Gucci and so on.

Strikingly however, the famous actress with the same easy and the ability to wear elegant outfits on the Red Carpet may wear suits in daily life. The other day at JFK airport, she was seen in a black trouser suit in common with chunky ankle boots and a polo neck top. Her strict outfit was complemented by a small diamond brooch and glasses. Despite the simplicity and strictness of her dress, it was the feminine and elegance style that complements with the well-made hairdo and natural make-up.