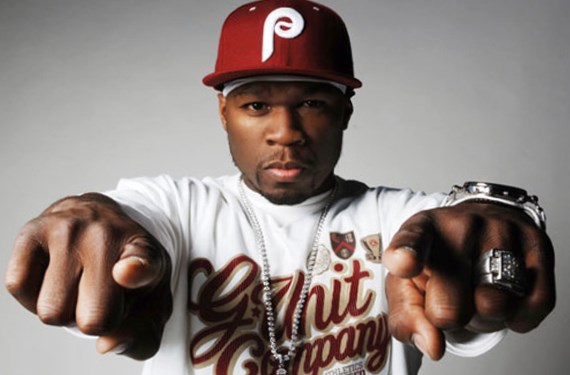 A well-known rapper 50 cent was ready on temerarious conducts. After fantastic music career a famous rapper decided to exert himself in a cinema and playthe main role.

If speaking about 50cent it is necessary to mention that his real name is Curtis Jackson and he is a famous American rapper. He gained his  popularity with the albums Get Rich or Die Tryin and The Massacre. He was born in a poor black town and when he was 12 he started to sell cocaine as well as the larger half of boys from his district. The boy didn’t know his father and his mother died when he was only eight. But later he stopped doing it and tried to start his musical career. Curtis was noticed by Eminem, who exactly helped him to gain popularity. Nevertheless 50cent music has the commercial success and the rapper becomes one of the most saleable performers in the world.

After gaining popularity in music a famous rapper decided to try himself in the cinema. He was offered to play a role of a football player who suffered from cancer. In order to play the role on a high level there was a necessity to lose his weight. After such a trial 50 cent bore no resemblance to himself because he lost 22 kg during 9 weeks. Nobody expected such changes from rap super star and multi-millionaire!

50 cent photo Before & After 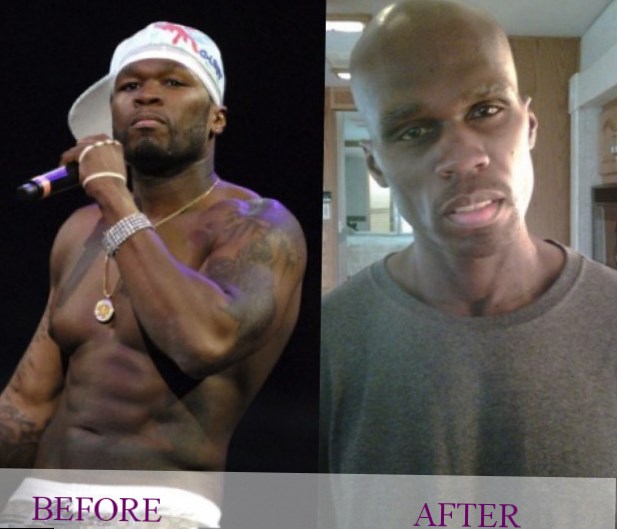 In order to achieve such fantastic changes the super star kept to a liquid diet and trained on an athletic track. He devoted to trainings three or four hours per day and gained such fantastic results. During nine weeks a famous rapper lost 22kg. It bears mentioning that his previous weight was 97 kg and after finishing the diet his weight was nearly 72 kg, with the height 180sm. In such a way a famous singer turned his muscular body, with which he liked to boast on cameras, into the body of a sick man, who needed healthy food.

The singer looked for a psychological support from the other actors, who lost their weight in order to correspond to a certain role. For the new role 50 cent agreed not only to lose his weight but also to get some of his famous tattoos off. Celebrities are ready to do even impossible things in order to stay popular. 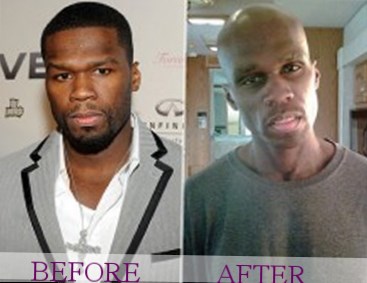 Rapper didn’t appreciate such a hungry way of life and at once after shooting started to gain his normal weight.

Also the rapper doubts that his role would be awarded by some rewards but he noticed that if people get to know about 50cent movies it will make him happy. After shooting the singer also said that such a weight loss happened with him earlier. It happened when he restored after the gun shot injury to the jaw he couldn’t eat anything and was made to consume only liquid food.

So let’s hope that the actor will never be forced to do such experiments on his body because he is one of such celebrities who can boast by a handsome and taut body without any exhaustible diets!