Jim Morrison – the leader of the famous rock-group “The Doors”, an outstanding poet, romantic, songwriter who unfortunately died young. Those who knew how old was Jim could not believe that the elderly man with a large beard was only…27. He was a strange guy through all his short life, and his death is a mystery. Morrison was always aware he was different. In the “The Doors” timeless hit Jim affirms:

People are strange when you’re a stranger…

By a strange coincidence John Lennon was killed on December, 8. It was the day when Jim Morrison was born (in 1943). When Jim was 4 years old, a tragic event he witnessed, set aside the strongest imprint on his mind and imagination. In the state of New Mexico, where he lived at that time with his family he saw a truck with the Indians after an awful road accident.The bloody bodies scattered over the road shocked the boy. Later he said that time he opened the doors for death. Jim was sure that the souls of dead Indians penetrated into his body and partly replaced his own soul. Later Jim Morrison said :

Death makes angels of us all and gives us wings where we had shoulders smooth as ravens claws.

At school Jim was a very good student. In 1962 he entered the Florida State University in Tallahassee. In January 1964, Jim moved to Los Angeles and entered the Department of Cinematography at UCLA. There he studied the history of the Renaissance, in particular Hieronymus Bosch works and acting. However, soon Jim was disappointed in schooling and soon the decision to create a group appeared. The name of the group – ” The Doors” was taken from the “The Doors of Perception” – Aldous Huxley book. In that book the famous author described the effect of mescaline (drugs) which helped to open ” the doors” to another reality, visit the places close to hell and heaven.

Thanks to a deep charismatic character and sexuality which was felt in Jim Morrison, ” The Doors” popularity was incredible. The army of fans (girls, first of all) attacked the clubs doors when Morrison and his friends used to give concerts. The fans wanted to see their idol and listen what he would say for that time. However, the concerts of ” The Doors” and scandals were almost synonyms, and the club owners were not always happy to let the young group performing on their territory. The quote of Morris :

I’m interested in anything about revolt, disorder, chaos, especially activity that appears to have no meaning. It seems to me to be the road toward freedom

explains the credo of a young man and an artist with a rare gift – to be loved by his audience.

Jim was addicted to hallucinogens – LSD. He wanted to reach the point where the spirit goes wandering among his peers. Drugs had a strong influence on “The Doors” works. Their concerts resembled shamanistic rituals. Jim believed that he could rule over the minds and bodies of their fans.

I am a Lizard king. I can do anything,

– he was sure. But very soon the stuff which helped him to “see, hear and feel ” started to destroy the man as a poet, a musician and as a person. Jim was often caught drunk and arrested for figthing. Concerts turned into the shouting and arguing with “The Doors” audience. Probably he did it on purpose, as once Jim said :

I like people who shake other people up and make them feel uncomfortable.

Very soon Morrison gained much and from a thin and sexy young man turned into a weighty drunk with a beer belly and a beard. However, he affirmed that it was good to be fat:

It’s terrible to be thin and wispy, because, you know, you could get knocked over by a strong wind or something. Fat is beautiful.

The official version of his death was the heart attack. The fans still believe that Jim stay alive and the death was just a fake. However, if the fact of death was affirmed, it was nothing bad for Jim, as he said once:

People fear death even more than pain. It’s strange that they fear death. Life hurts a lot more than death. At the point of death, the pain is over. Yeah, I guess it is a friend. 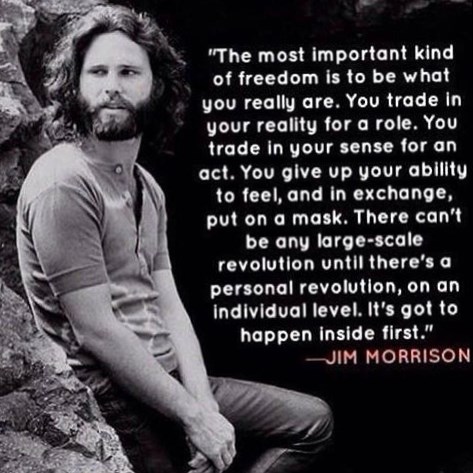 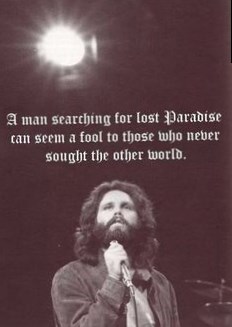 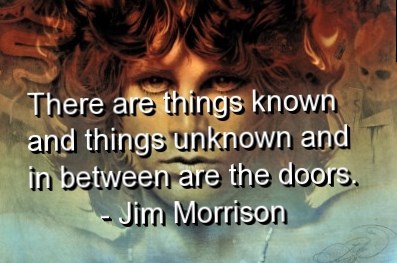 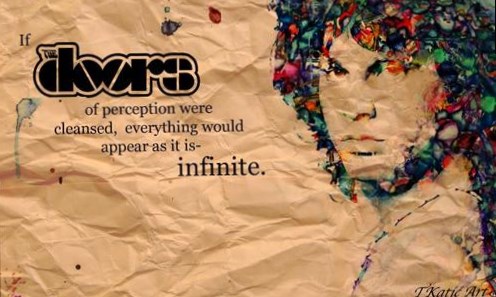