Dookie – the first dog in Queen Elizabeth’s life which her father brought in 1933. 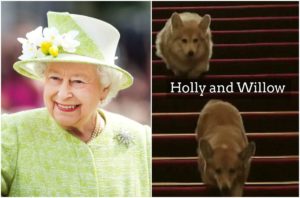 Corgi is and always was a constant pet in the royal family.

Queen Elizabeth II following the tradition of her mother, is surrounded by these four-legged creatures all her life.

Her first corgi, the Queen met in 1933 when her father brought a dog home. It was decided to name him Dookie.

It is said that the Queen had near 30 dogs throughout her life. At the moment Her Majesty takes care of two corgis, Holly and Willow, who became famous after participation of the Olympic Games in London in 2012. However, there was a moment when the Queen owned eight dogs at once.

There is a bad news for all the dog lovers and for those who follow the life of royal pets. Queen Elizabeth II announced that she’s not going to take another corgi. Even when her current dogs pass away the Queen of Great Britain and Northern Ireland won’t adopt the next.

That’s because being 88 the Queen is aware of her duties and responsibilities. She is not so active as she used to be years ago, and her two dogs are also not young. Thus they all lead calm life. But in case if the dogs are young, they are very energetic, and for the Queen there’s a risk of injury. Queen Elizabeth has a fear of fall and breaking bones, but she can’t allow herself giving up performing her duties for long time.

Do you know what was the Queen’s first own dog?

Of course it was corgi. It was her 18 birthday when she was presented with a puppy. The princess named it Susan. That dog even shared the Queen’s honeymoon time.

The royal kids, prince Charles and princess Anne, had their own nursery corgi Sugar.

Even when the children became independent and adult, Queen Elizabeth II continued bringing new puppies of this breed.

The two dogs that are now by the Queen’s side will be there till the end, but they won’t be replaced by the new ones.

On video the Queen with her corgis in 1989