Dog George and his stylish haircut

This is a real love story! Moreover, a crazy love story.

If you at least once saw Ryan Gosling with his dog, you wouldn’t have any doubt that the actor could do everything for his furry friend.

These guys got acquainted in 2000 when Ryan made up his mind to adopt a dog for a pet shelter. As the life shows, he has never regreted that decision. Ryan and George became so close, that we can’t but admit that they are like one entity. 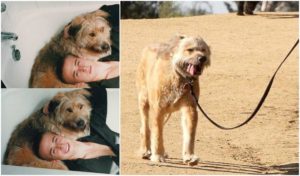 Ryan and his Dog George

It’s hard to say what breed the dog is, but it looks like a common street dog. For this and one more reason Ryan found a solution.


Do you know what?

He shaves George. At the very beginning it was just a preventative measure for the dog not to be warm in summer. But Ryan noticed that such “hairdo” makes the dog look more attractive. So it was decided to shave him every time when the fur grows up. It’s strange, but George itself knows when the time comes to shaving.

Looking at these guys you can’t stop smiling. They look so cute together. Ryan is a very tender and loving owner. He takes care of George so much that the girls will envy.

Regarding the dog’s age, Ryan realises that he needs more care and attention. That’s why almost everywhere where Ryan goes, his dog follows him. They are inseparable. In addition, this love can’t go unnoticed, because Ryan tries to make his dog’s life as comfortable as possible. When George is not able to go, or he’s too tired, Ryan shows that his muscles are not only for cameras, and holds the dog in his arms. This is the real friendship!

George is a constant guest on the shooting area. When his master is working, the dog takes rest in the shade. Ryan was even noticed giving the dog a drink from his own bottle. Maybe, right due to such care George lives such long life.

All in all, these relationships impress. Not all the children get such care as this dog has.

We wish you long life, George! The world will be happier if there were more such kind people as Ryan Gosling.