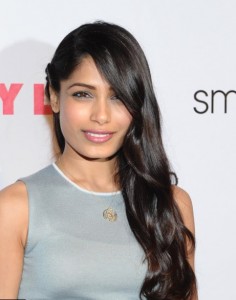 Freida Pinto is renowned Indian and American actress, she was born on 18 October 1984 in Bombay, India. The actress was born and raised in Mumbai in a family with Portuguese roots, her father is a manager of a bank branch of the Baroda Bank, and mother is a teacher of the St. John’s Universal High School, the older sister is a producer of one of the news channels.

In 2006-2007 Freida was involved in several television projects, and starred in advertising, where she was noticed and invited to participate in the movie “Slumdog Millionaire”. It is the year 2008 was the debut of Freida Pinto in the cinema industry. The film had a success and was awarded the Oscar.
In 2009 the actress was nominated for the award of British Academy of Film and Television Arts as the best role of the second plan and also received Screen Actors Guild Award for outstanding work in the film.

In 2011 she starred in the film “Immortals”, where she played the role of Oracle Phaedra. Freida Pinto is also famous as a professional dancer, fond of Indian traditional styles and salsa. 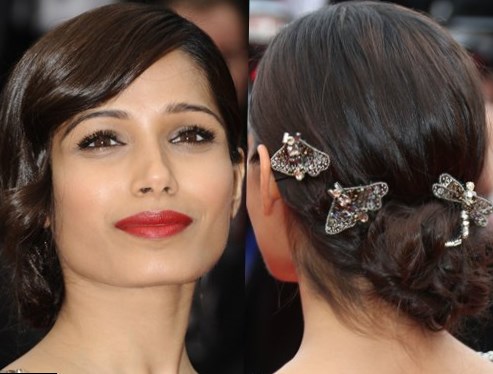 Freida always looks great and every year it becomes more and more beautiful. The actress certainly understands what she has gorgeous hair and skillfully uses it, making the choice in favor of the most excellent and beautiful her hair and styling. A lover of everyday simple and graceful hairstyles, Freida Pinto pleases their fans, appearing at events in different ways.

Choosing a hairstyle for any celebration, the actress tries to find the one that will look elegant and plain at once. But she has outfits and hairstyles that amaze her fans because of their complex design and plenty of accessories. For special occasions Freida usually selects a classical beam, cleaned up the curls, ponytail or just loose hair.

The actress likes to leave free several thin strands of hair that make the appearance as natural as possible and at the same time playful.
So for the screening of the film “Desert Dancer” Pinto made careless hair, giving hair a bit of volume at the roots, removing them in an easy bun on the back. And for the premiere of the film “Immortals” in Los Angeles her luxury outfit was finished by laid hair in plaits and cleaned up them.


The actress is not particularly experimenting with colours and length of hair, she values her natural colour, luxurious and thick hair that’s why she was not seen with a different hair colour. As for the length of the hair or haircuts, there are also no major changes – just everywhere her usual loose hair, laid in beautiful curls. Only in 2013 Freida decided to experiment and cut oblique bangs that made her face younger and less elongated. 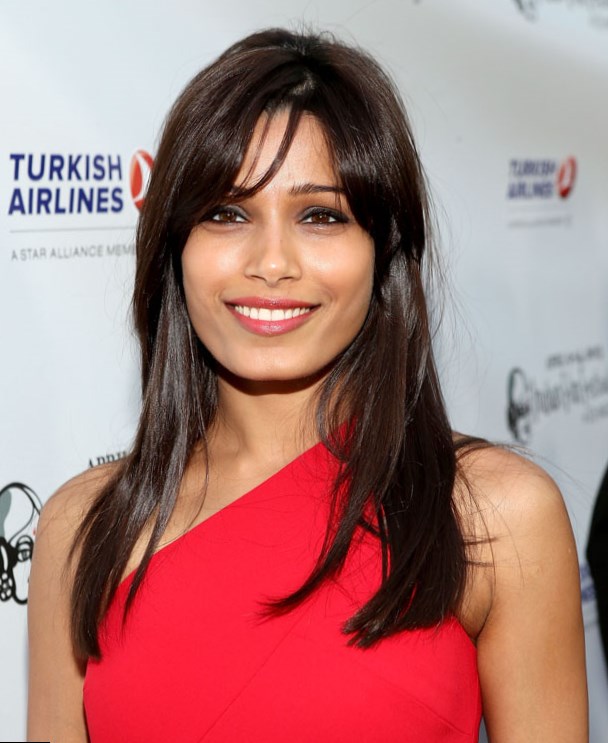 In April 2013 at the premiere of the film “Gangs of Wasseypur” in Los Angeles, Freida has straight luxurious hair and short bangs combed to the side.
Recently the actress decided to change the image and to shorten the hair, which surprised not only journalists, but also their fans who now want a haircut like hers. Current Freida’s hairstyle is a classic bob – a timeless style made modern with a clean and low side part. 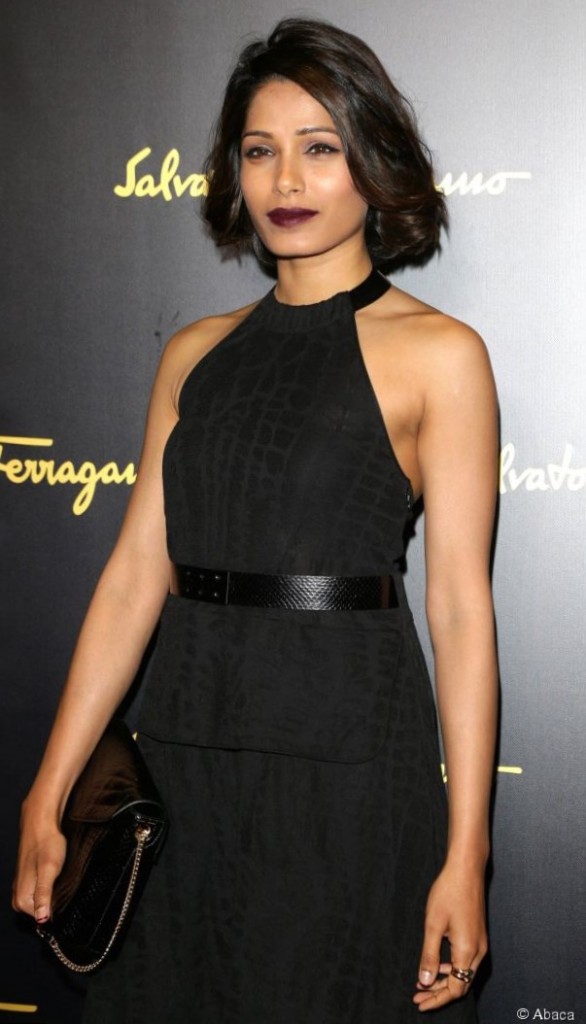