You think that Halle Berry is a young healthy woman, don’t you? Your eyes must be deceiving you! In fact, an actress Halle Berry is almost half a century, she gave a birth to her first child after forty and she suffers from diabetes. Besides the Oscar winning actress is almost deaf in her right ear and was involved into a terrible car accident, after which she lost her memory for a while.

But Halle Barry seems to be made of some unusual strong material, because in spite of all her disasters, she looks perfect.

The actress, whom we know due to such films as “Cloud Atlas”, “Things We Lost in the Fire”, “X2” and many others, was included into the list of the most beautiful people of all times and even in 2003 she occupied the leading position there.

What is the secret of her great shape? We will try to reveal it!

Halle Berry had to struggle for the better life from the childhood. Her parents got divorced, when the girl was just 4 and she was raised by a single mother. Halle was half-African and it made her quite unusual among her classmates. She knew that the life is not easy for multiracial people.

She is strong and it helps her to train a lot and to keep to strict diets in order to remain slim and active all the time.

Halle tried numerous diets during her acting career. She was rumored to be the fan of Harley Pasternak’s diet, named “5 Factors”, which presumes 5 meals per day and 5 workouts per week.

When she was getting ready to the role of Jinx Johnson in “Die Another Day”, she kept to an express diet, which brought her great results. 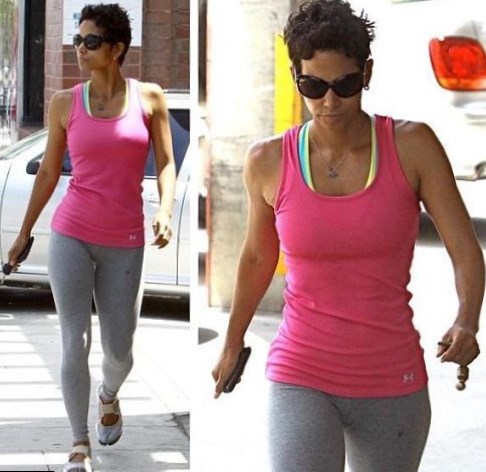 According to this diet, Halle ate three times per day and her portions were extremely small. She had a boiled egg and a toast in the morning, fresh vegetables and grilled chicken for dinner and an omelet with some salad for supper.

As for physical exercising, Halle Berry prefers supersets workout. You can also try it, if you like to get slimmer in the shortest period of time. Such trainings are based on combination of two exercises for completely different parts of the body. Thus bench press can be combined with barbell curl or squats can be combined with leg rising.

You can invent your own sets – combination of exercises – and try it at home in your free time. You will like the interesting work out, which lasts within 40 minutes or less and brings great results!

Do you want the body like Halle Berry has? Then work it out!