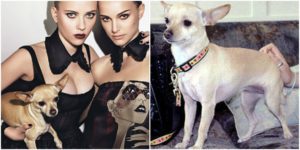 Scarlett Johansson is a very popular and busy actress. Thus when she has some free time, she adores spending it in a company of her fur friends.

A cute Maggie was the first addition to Scarlett’s family. The actress adopted her at the very beginning of her independent life. Just when Scarlett got her personal apartment she realised that she needs a pet. This is a story of how Maggie took its place in celeb life.

The next and much bigger member of the family was a rescue dog Baxter. The dog was adopted by the actress in 2008 together with her ex-husband Ryan Reynolds. This golden retriever is a really big boy.

The actress says that Maggie is a ham. Yes, really. It’s strange, but she claims that this dog not only looks, but also smells like a ham.

Maggie even once appeared on the pictures of the magazine together with her celeb owner. Scarlett loves this dog so much that at the very beginning of her relationship with Ryan, he felt jealous and called Maggie “a 7 pounds dictator”. However, Ryan became a kind of caretaker for the tiny doggy when Scarlett was away.

As it occurred, Baxter is Ryan’s dog. So it was natural that after the divorce the dog stayed with his “dad” who actually found him.

At the moment, Scarlett shares a home with Pancake and Maggie. Though, she is extremely successful these days, she says that she’s not going to spoil her pets. They have everything they need, but not more. It’s her way to keep the dogs grounded and well-brad.

Nevertheless, Scarlett Johansson treats and loves dogs like her own children.