Australian model Ruby Rose became internationally recognizable after her role in the series “Orange Is the New Black”, where she portrayed Stella Carlin, the person of a neutral gender. Her heroine was close to Ruby’s heart as she had to struggle for her personality from her teens too. She told to her mother and classmates about her lesbian orientation and she was bullied for this. Now the star is called the most influential lesbian in Australia. 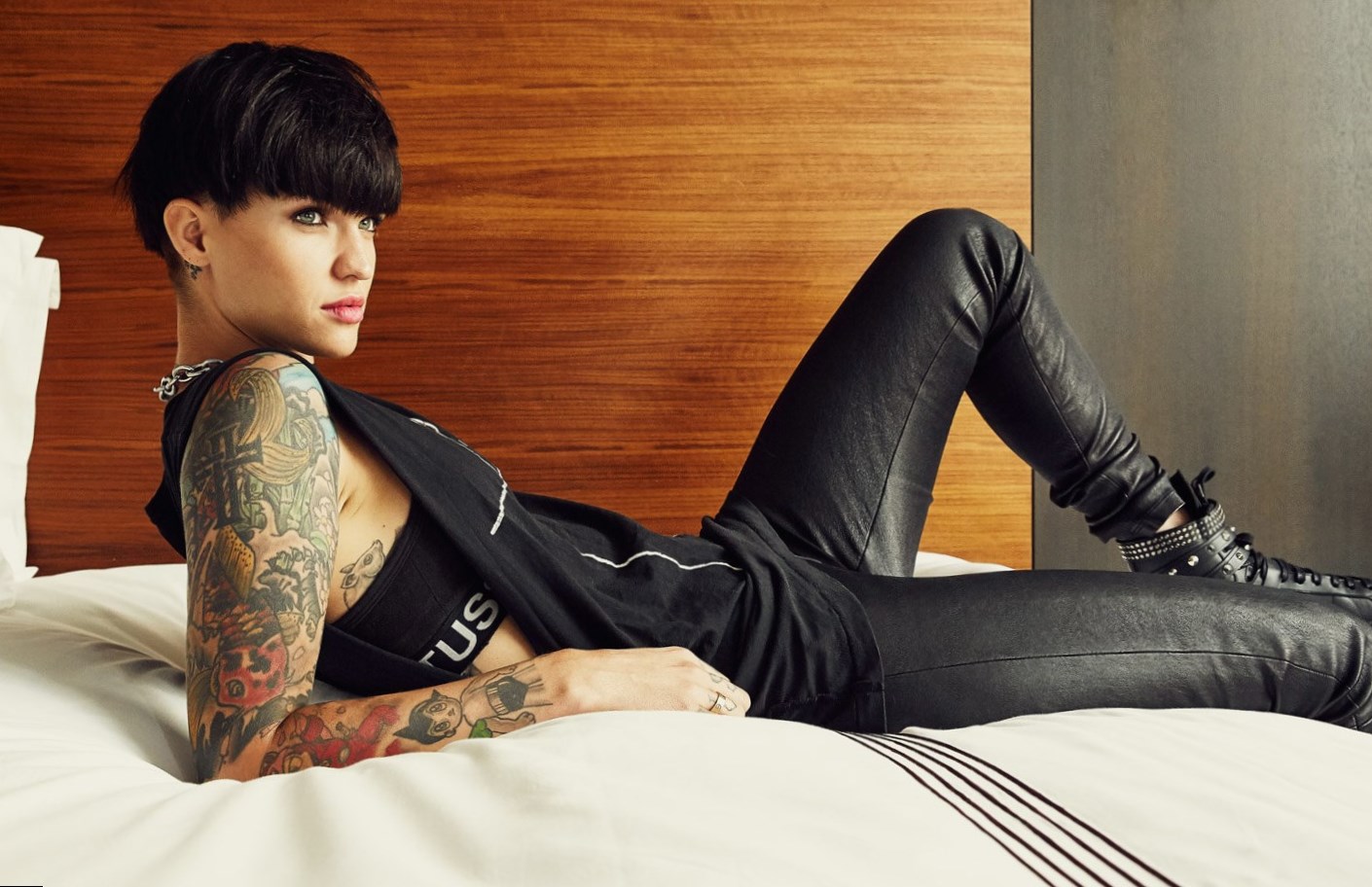 Ruby style and Ruby fashion is the reflection of her inner world and life position. At the same time she is tall and slim and her great body gives her an opportunity to choose any clothes she likes and look perfect in them.

Ruby Rose remains one of the most beautiful women in the world in spite of more than 30 tattoos, which decorate her body. 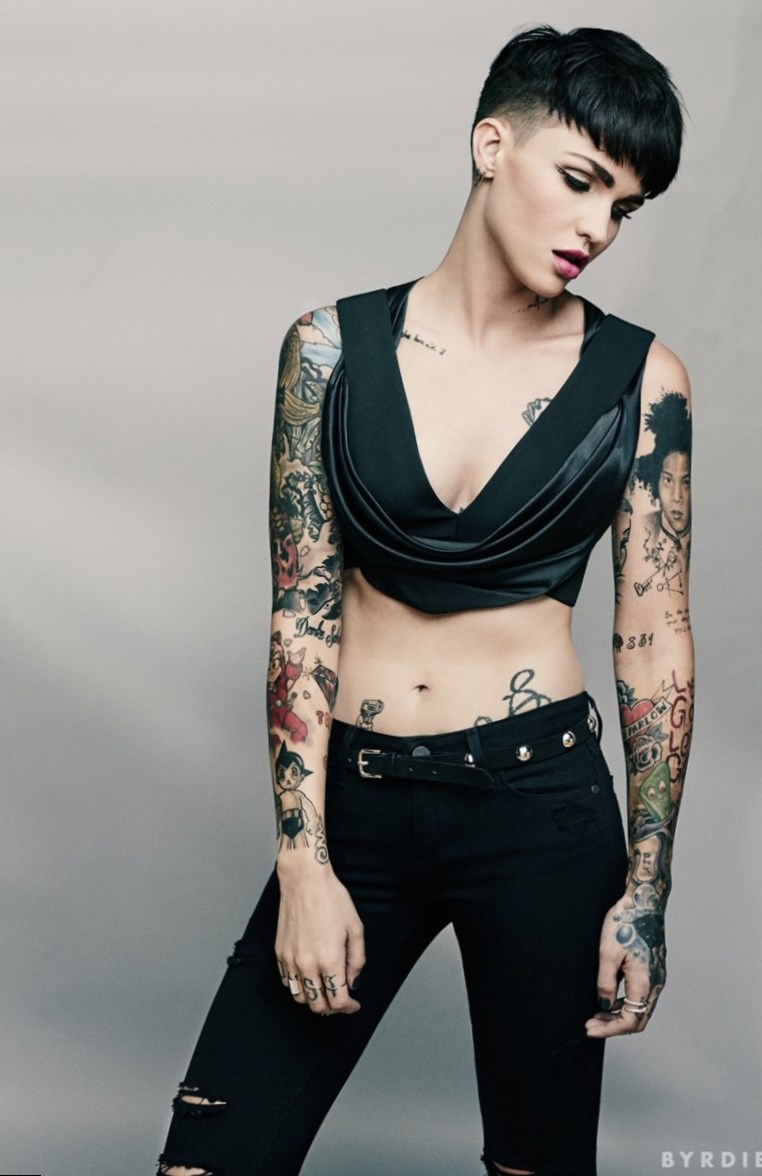 Ruby Rose has great feeling of fashion and that’s why she was invited by the brand “Milk and Honey” to design Ruby Rose clothing for them.

The star is engaged to the designer Phoebe Dahl and it was her girlfriend, who inspired the model to create separate Ruby Rose clothing line. So the girls, who want to look like Ruby, can just get apparel from Ruby street clothing label and enjoy the new look. 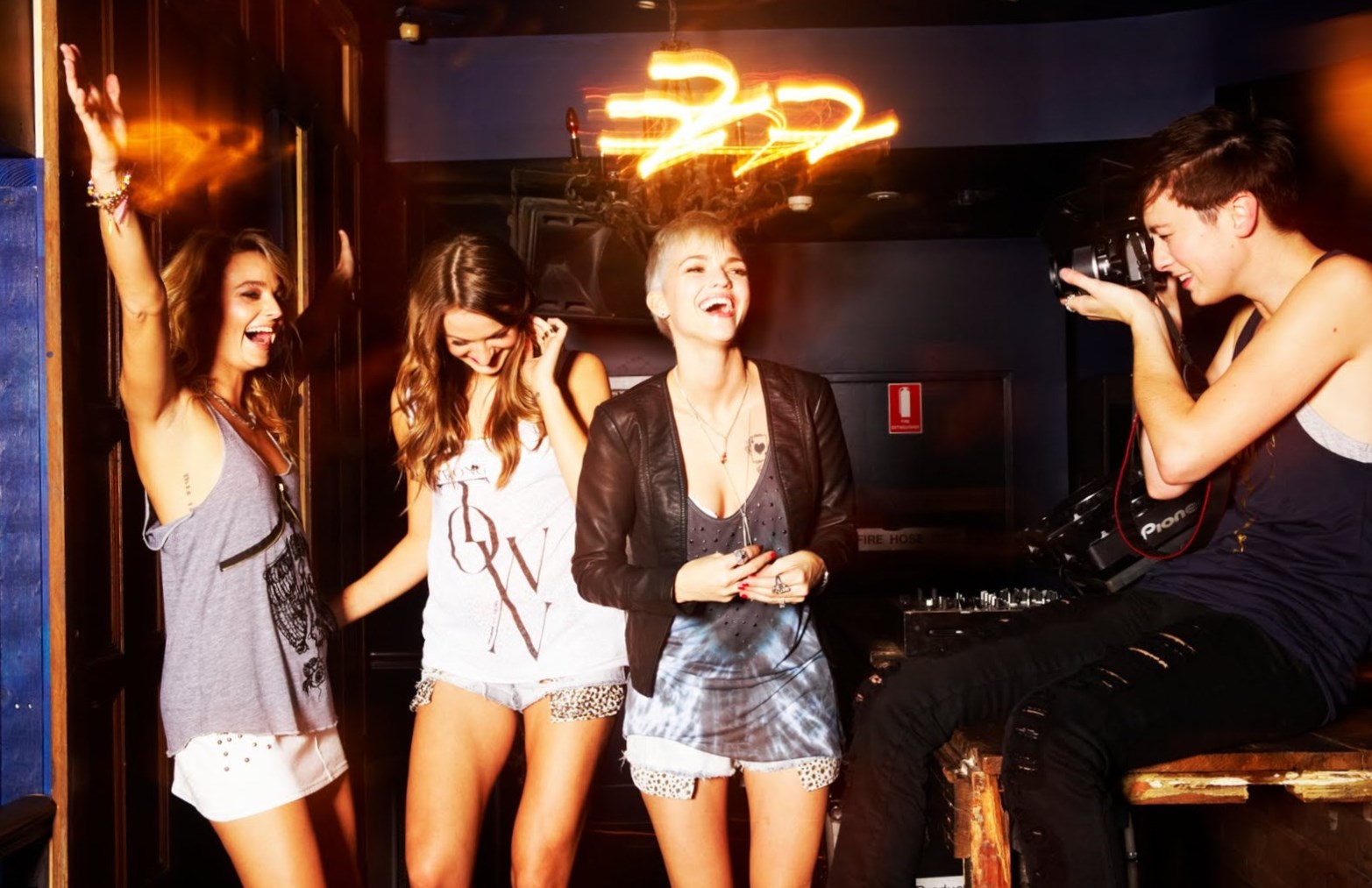 To describe the style of Ruby Rose in several words, she prefers short dresses, jeans and shorts in her casual life. The star likes to wear luxurious high heeled shoes and her shoes are the part of Ruby Rose costume. Very often her shoes are of unusual design with some interesting details like stripes, feathers, beads etc. 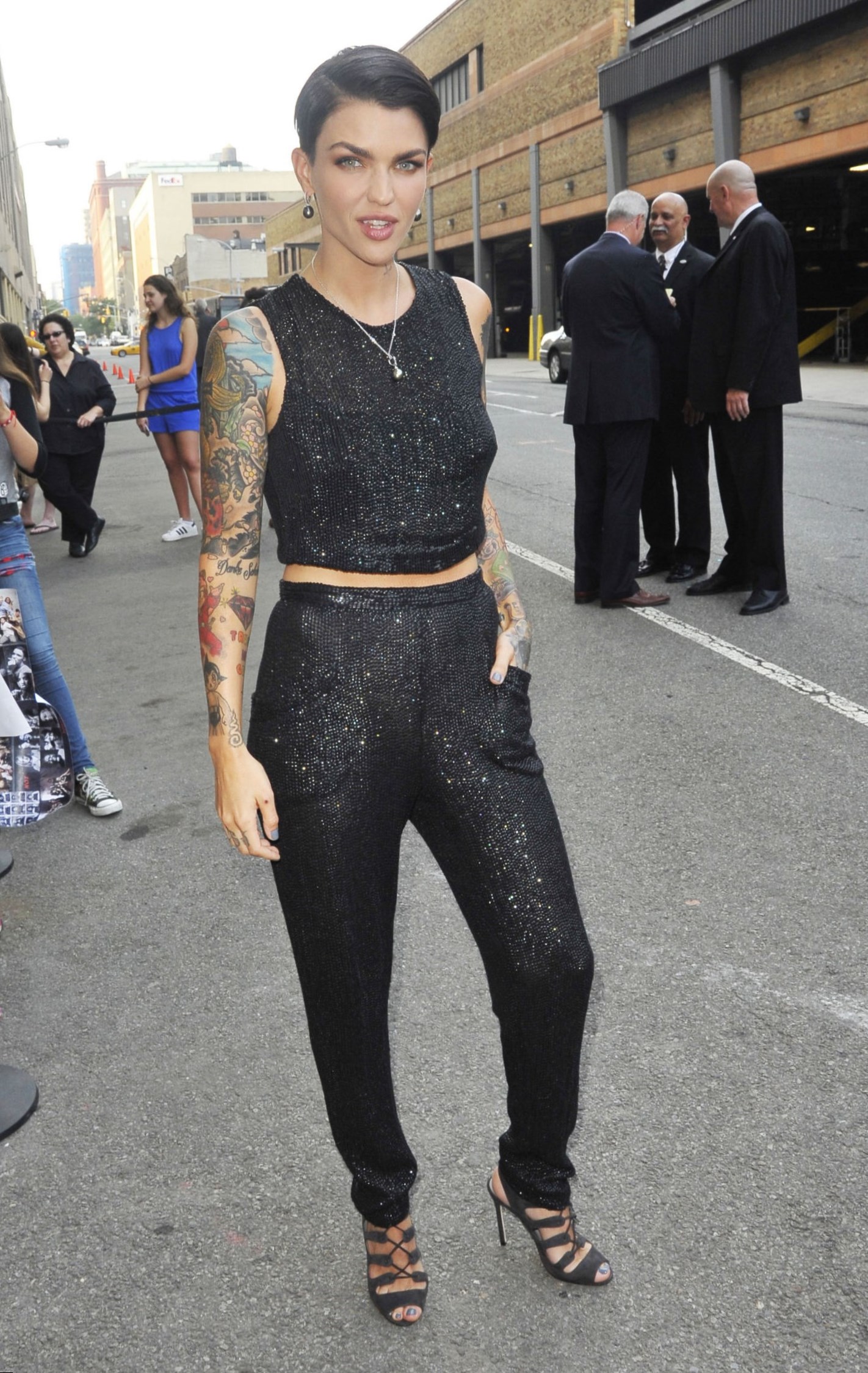 She is the lover of small bags, you will never see Ruby Rose with a roomy bag, and mostly she gets small bright clutches.

Ruby Rose always wears bright make up and unusual hairstyling, which she changes very often. Here are the most interesting looks of the star, which characterize her style. 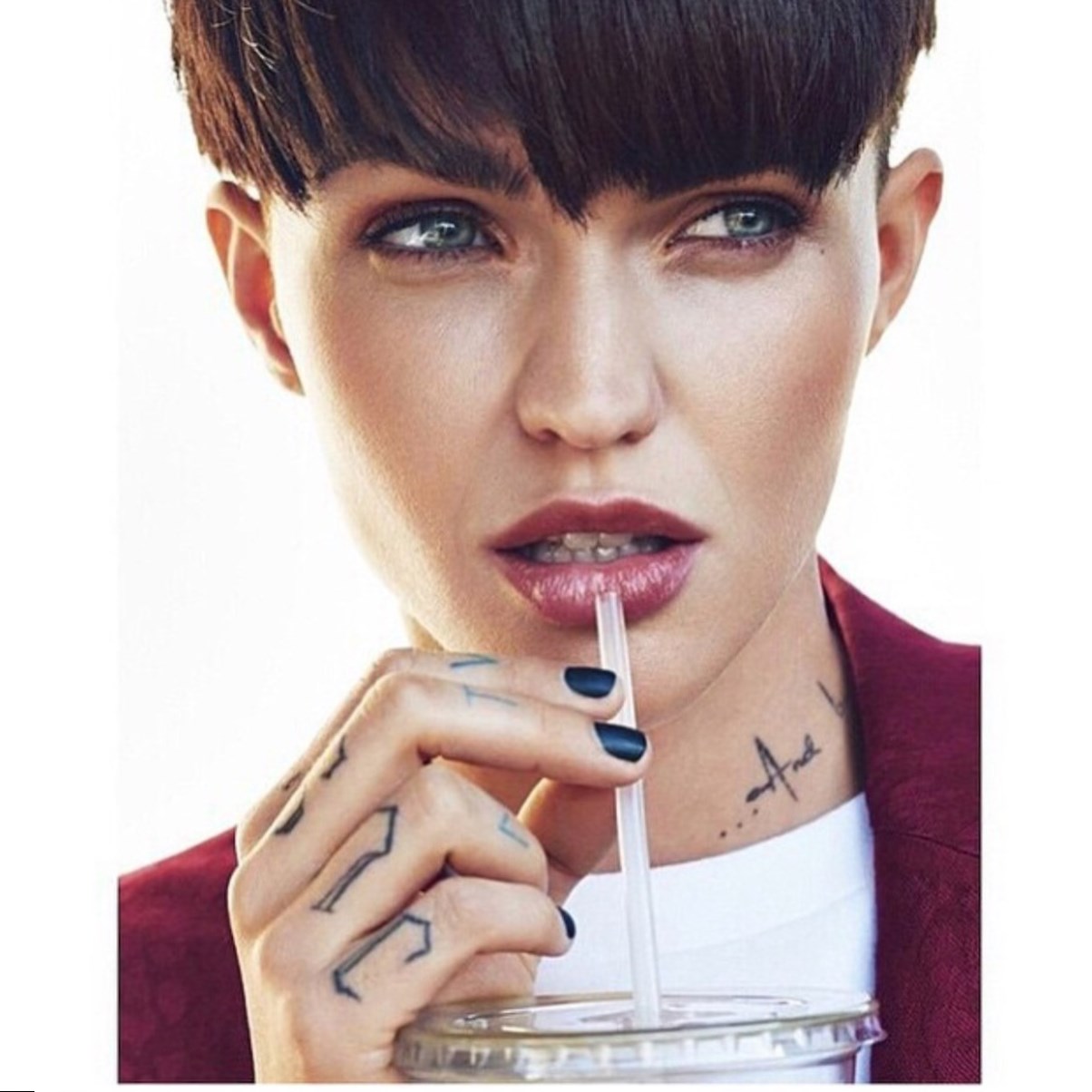 1. In 2009 Ruby Rose visited Australian Nickelodeon Kids’ Choice Awards. The model looked good on the red carpet. For the event the star chose an unusual hairstyle. It was the brightest feature in her look. That’s why she chose clothes of neutral color. Ruby wore a short dress with a gray top and black bottom. She added high heeled shoes. Her slim wrist was decorated with a huge watch. Two zippers decorated the dress from both sides. 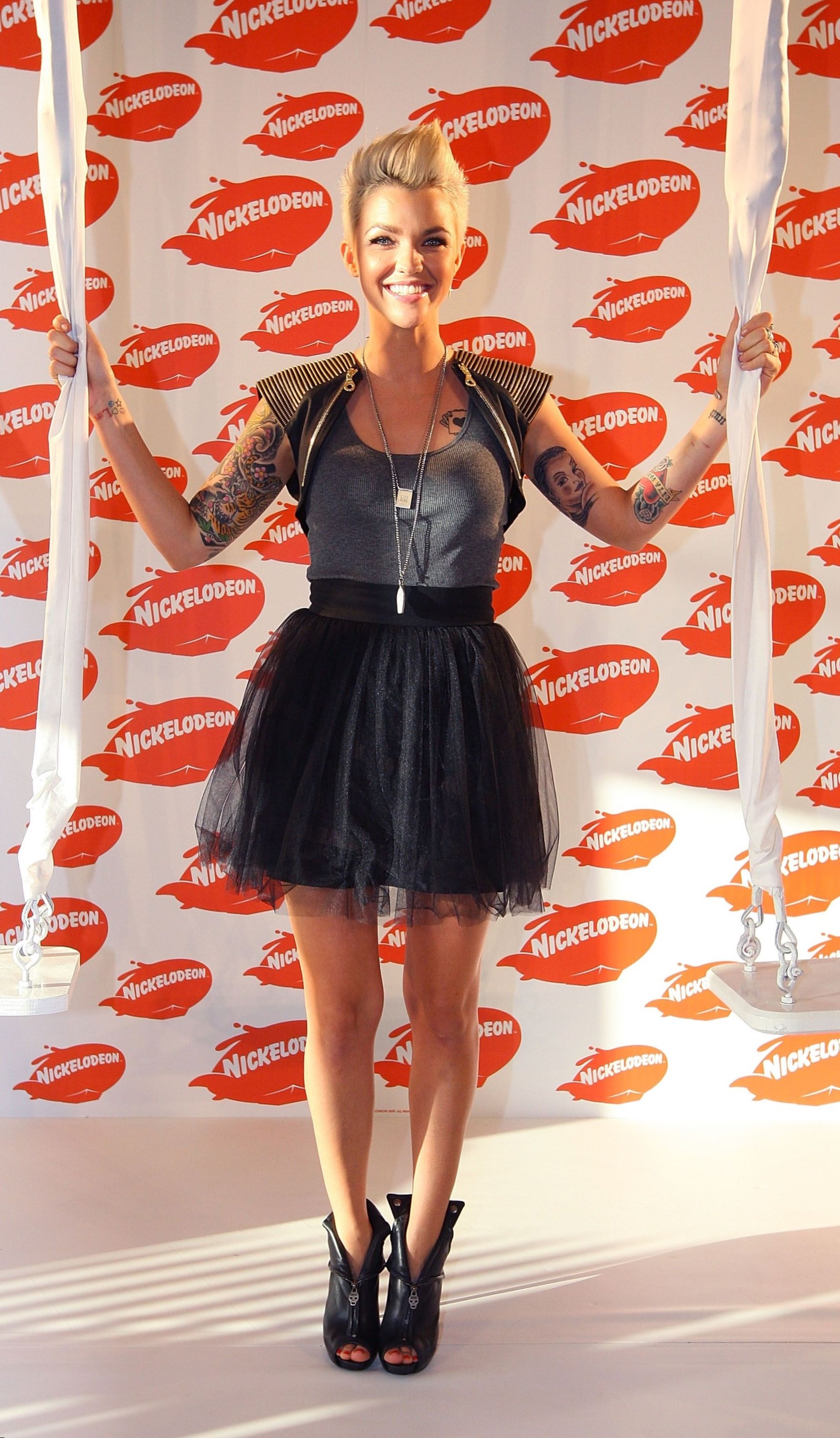 2. A year later Ruby Rose enjoyed her status of a celebrity. She liked it so much that sometimes forgot about the main principles of a good taste. At ARIA Awards 2010 Ruby Rose put on a short light purple dress and the shoes to match. The dress was decorated with flower prints, multicolored flowers with golden petals, a big black bow and two big patch pockets. Her look was criticized by fashion critics, but was admired by teenagers, who tried to create the same image at home. 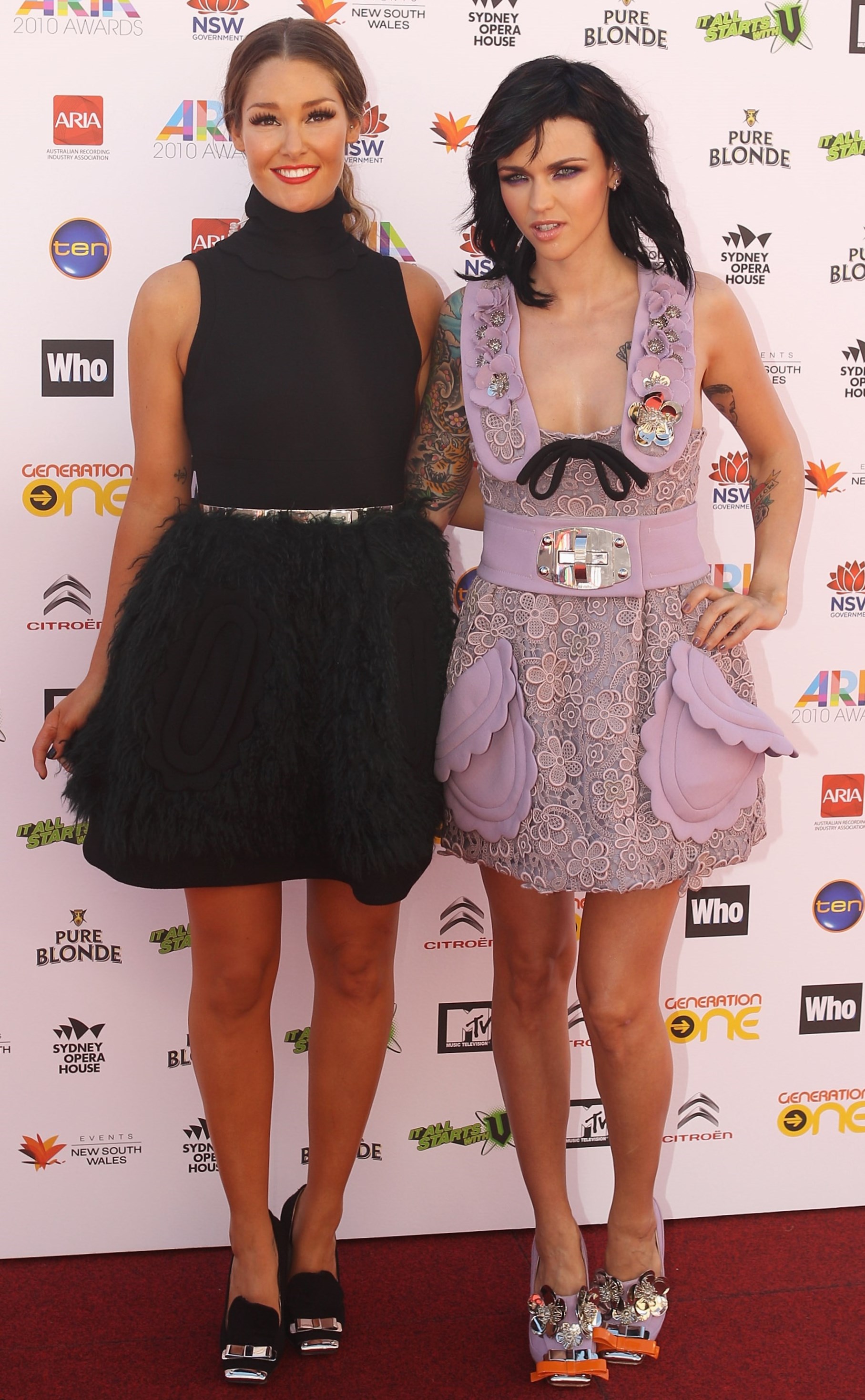 3. Gradually the star was getting older and her feeling of beauty was developing. For 10th Annual Astra Awards in 2012 she put on a classic white dress with two frills by each side. The star didn’t use any fussy details. She put on a narrow leather belt of black color and added black high heeled shoes. Her hairdo and make up were perfect. Great girl! 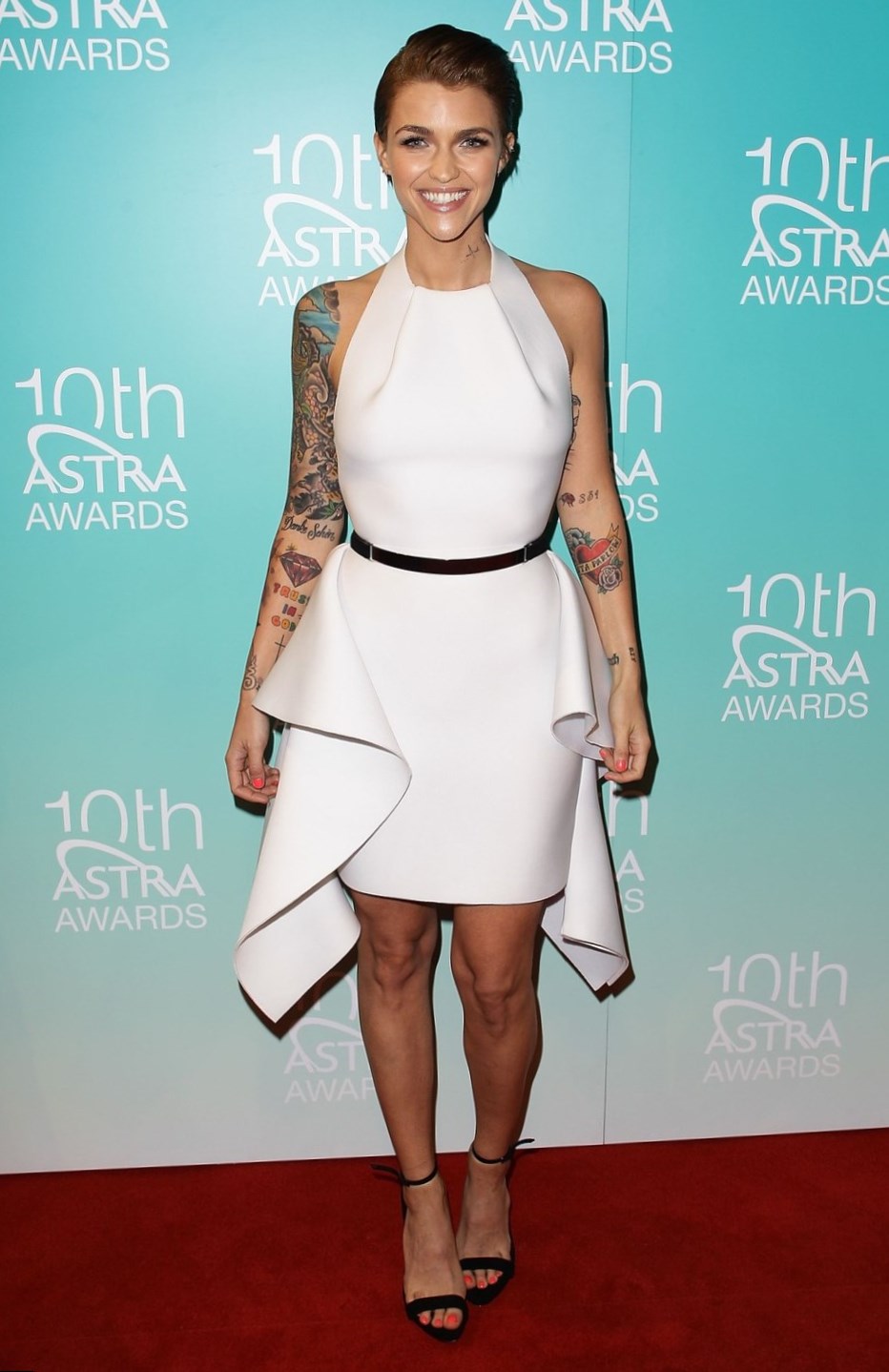 4. Ruby Rose dresses are her visiting card. At the same time the star is ready to wear pantsuits as well. In 2014 for Mercedes-Benz Fashion Week she put on a suit of that kind. A wide blouse and extremely narrow pants looked quite ordinary, but the pattern of the cloth made the suit look really attractive. Decorated with flowers, stripes and frills, the costume was noticed by fashion designers. Ruby Rose decided to put on flat shoes. Probably, she got tired from high heels. 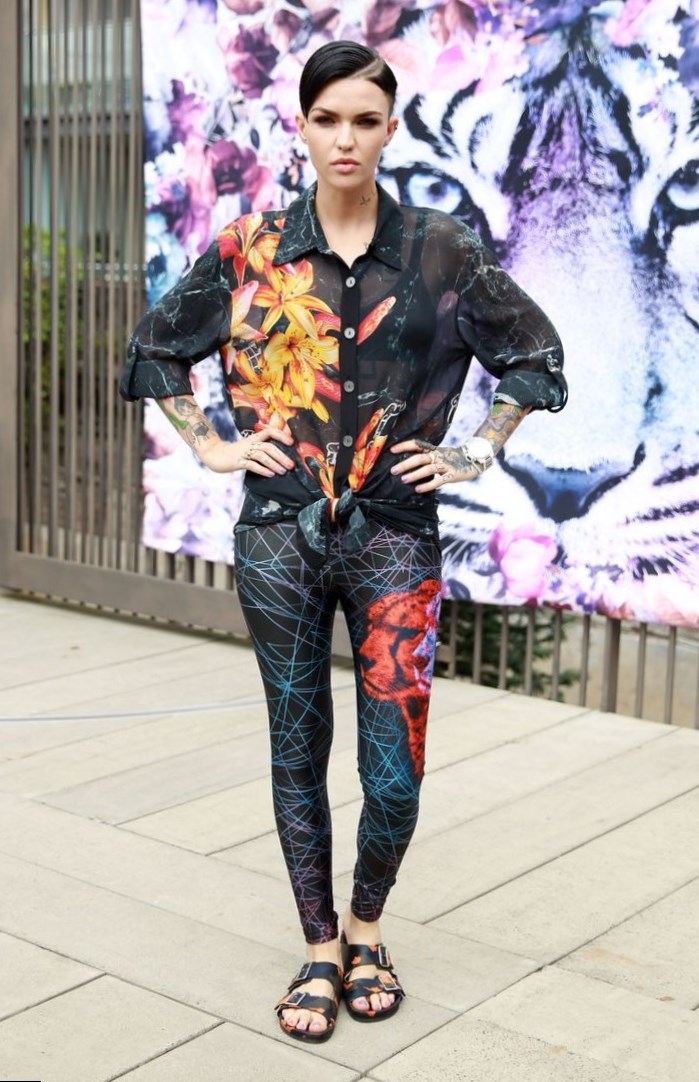 5. For GQ Men Of The Year Awards the star chose trousers again. She added bright gauzy blouse to her holiday look. The blouse opened girl’s breasts. She looked sexual and attractive in this suit. 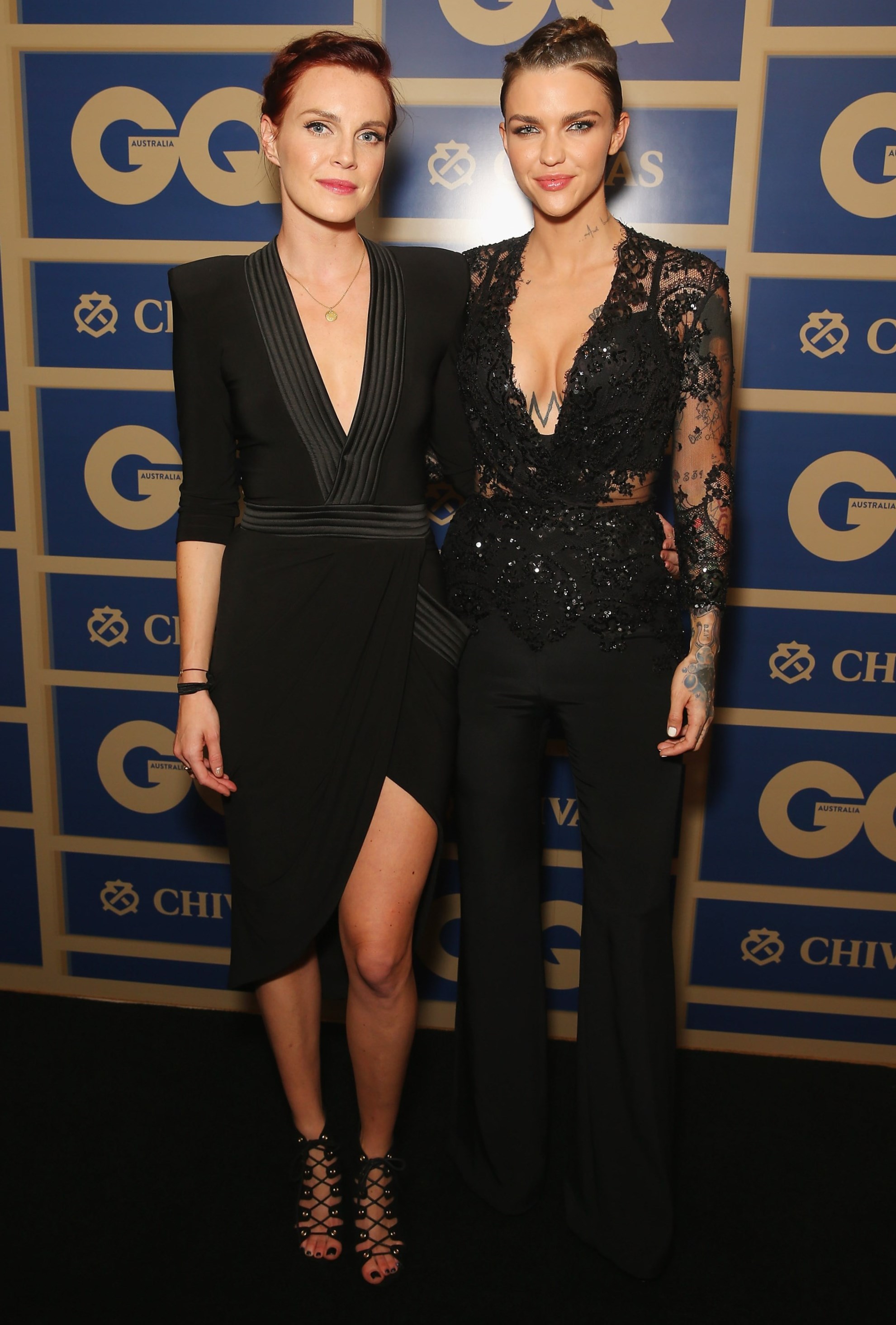 All the outfits, mentioned above, Ruby Rose chose for various solemn events. Like any other celebrity, Ruby Rose is different at some solid public events and at home, where she can relax.
It is impossible to describe the style of a model and an actress Ruby Rose, without mentioning her look in her casual life. In August, 2015 the star visited medical establishment in Beverly Hills. She looked great, wearing grey baggy shorts, a white T shirt, a checkered jacket and red massive boots with a golden lock just in the front part of shoes. Ruby Rose made a simple hairdo; she wore no makeup and put on huge sunglasses. 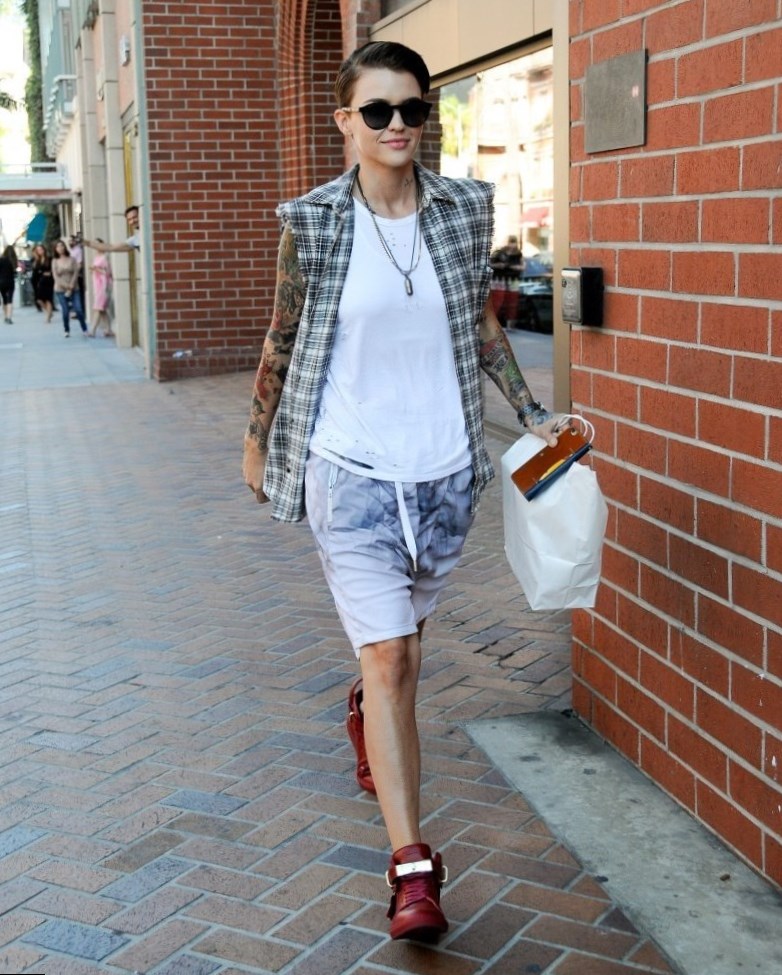 In her everyday life Ruby Rose likes sports style of clothing. She wears leggings, shorts and long gulfs. She doesn’t like to wear high heeled shoes in her casual life and puts on boots, slippers or snickers. Her numerous tattoos serve as decorations for her. 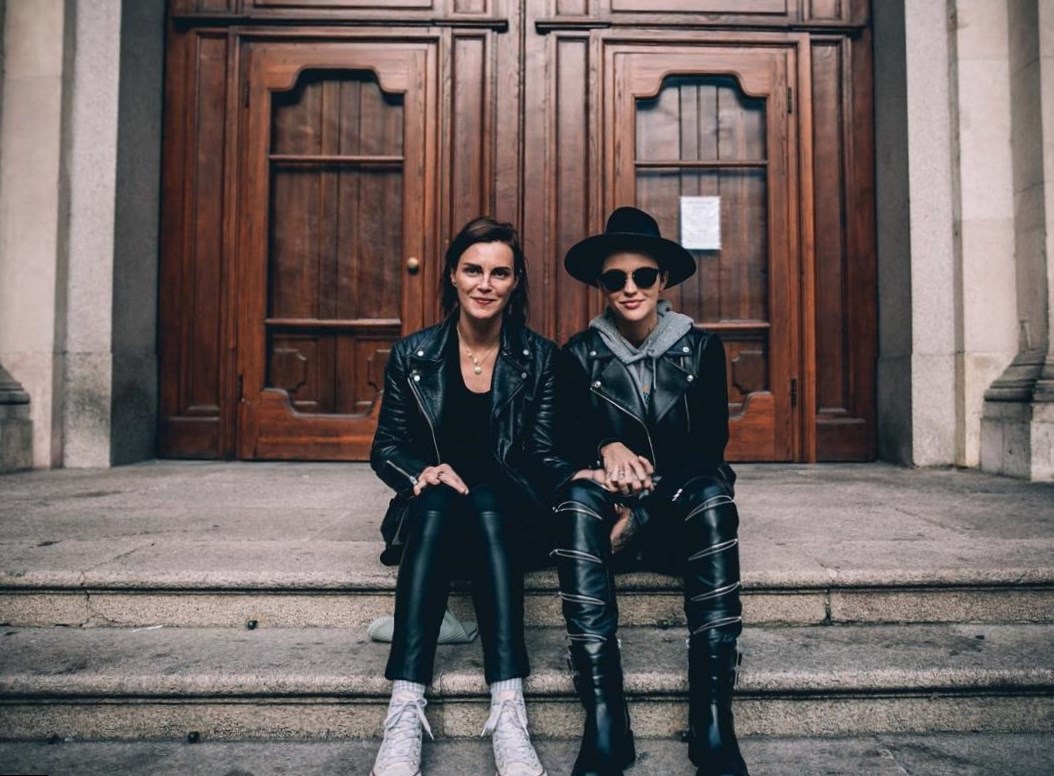 She wears no makeup, when she has a day off. Very often the star puts on a boyish cap.

The style of Ruby Rose is neutral, so both men and women like it. Ruby can boast with long slim legs. That’s why she always opens her legs, wearing shorts, short dresses and skirts. 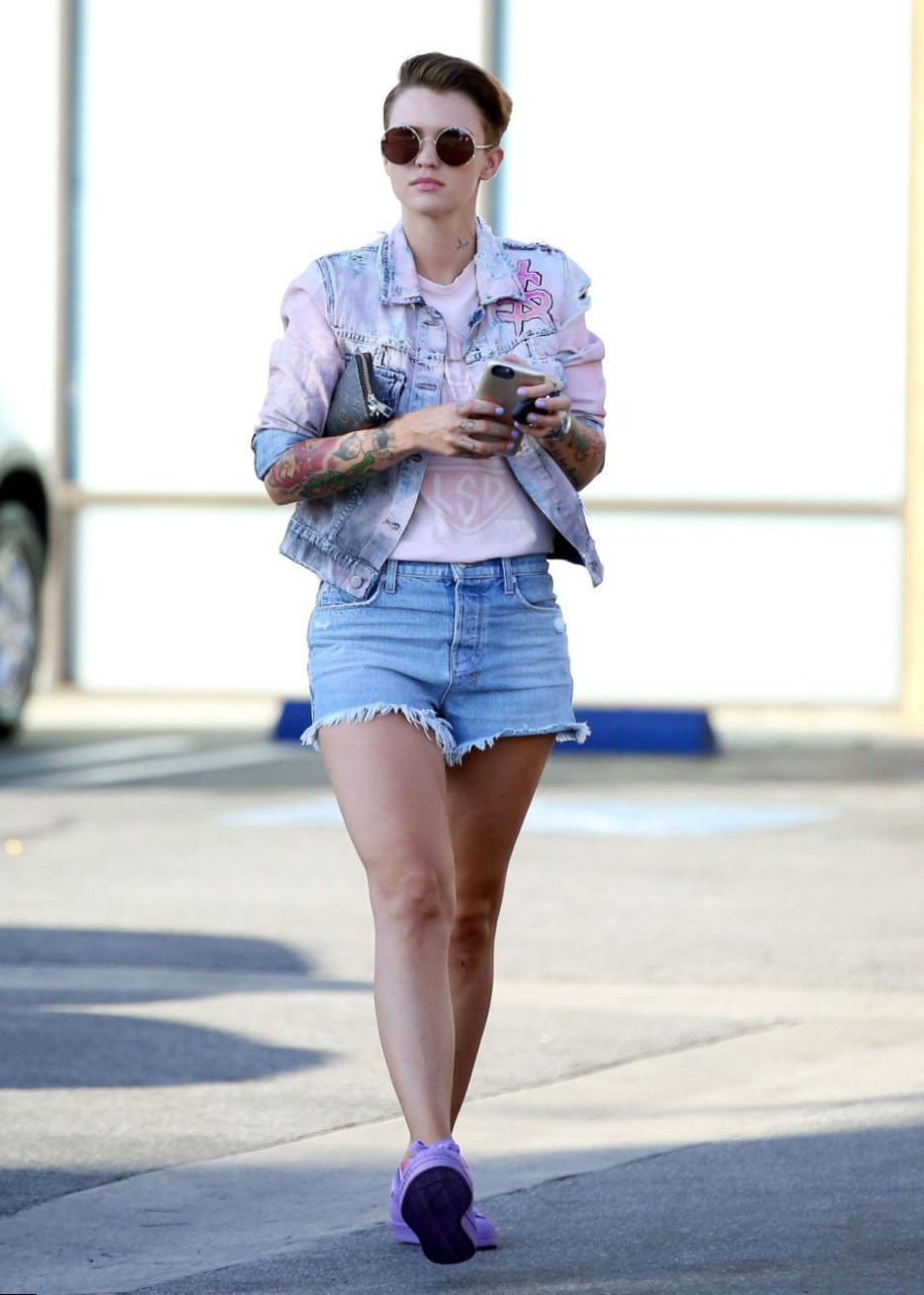 She wears neutral make up, but colors her hair all the time.

The star openly tells, she is lesbian and it is reflected in her everyday style. The star is beautiful and very self confident!