Katie Holmes has a special place in a list of the greatest actresses since the time of her first bright role of Joey in “Dawson’s Creek“. Since that time, Katie turned from a shy teen girl into a hot woman with loud roles in films like “Pieces of April” and popular blockbusters including “Batman Begins”. Another stage in her career and one more change was connected with “How I Met Your Mother”. 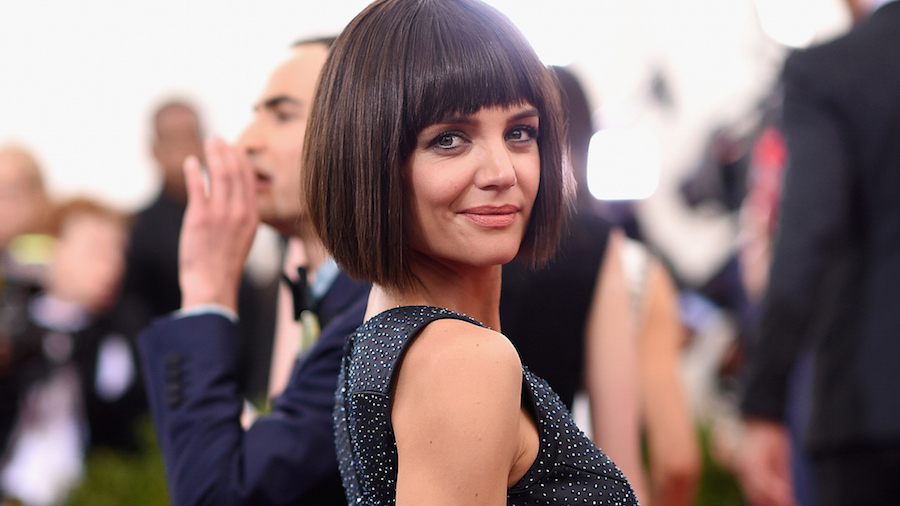 All the time, for every role her shining chestnut-brown hair has been slicked back, blown out, and curled so many times that it’s hard to count.

Let’s now look back at all Katie’s hair styles through the years of her career.

1. The first thing to mention is that Katie has naturally curly hair.

In September 1995 the young actress appeared in a very sensible image. It was a kind of Renaissance look. For the occasion of the 47-th Annual Emmy AwardS that was held in California, Katie didn’t invent any special hairdo. Her hair was just a bit gathers on the top, but her natural curls were untouched. If you want to look romantic, you can borrow the idea 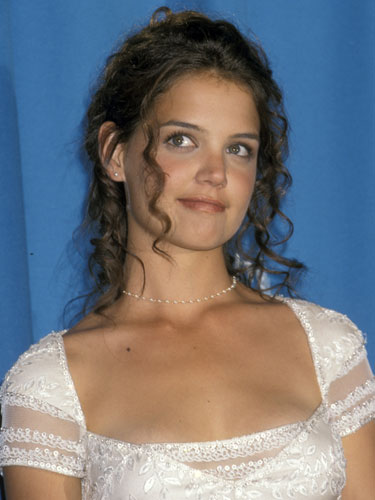 At that time she still preferred her natural waves. And it’s quite obvious, as the curls appeal to her very much. Here you can see one of her images of that year 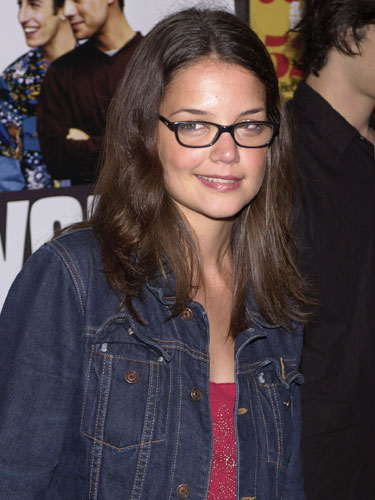 The image of an innocent little girl was substituted by a chic lady. That time the actress wore a quite simple bob over the ear. That’s how it looked 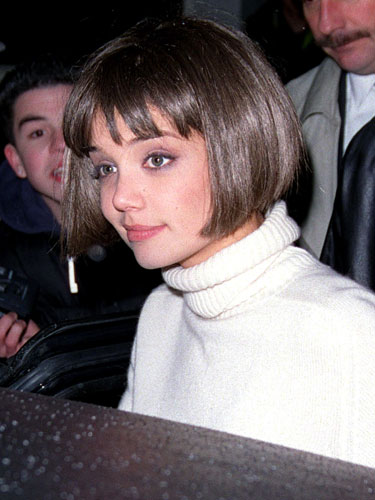 4. In 2002 the premiere of the film “Abandon” proved that Katie Holmes is not only talented actress, but also a charming woman.

After a year her hair became much longer. In addition, Katie added light stripes into her hair. She appeared with honey highlights in her hairdo and it made her look gorgeous. Luckily, we have an opportunity to make sure 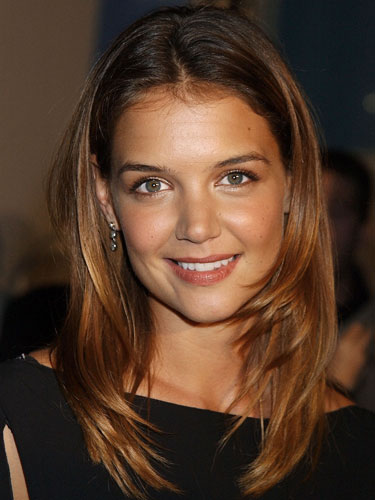 5. All the girls in their childhood wore the pigtails.

So did Katie Holmes, but it was in January 2003. She looked so cute and cheerful, that we can’t but share that her style 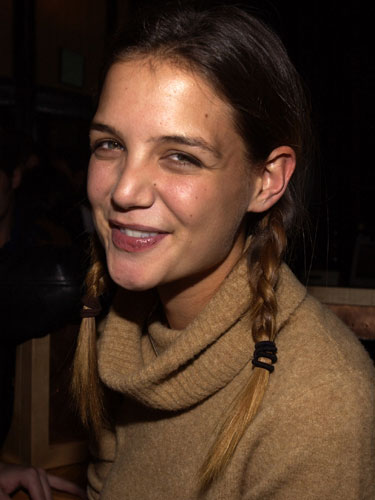 6. Later the same year, in spring 2003, Katie decided to dye her hair in two colours.

The actress had her colour dyed in dark and blonde. The blonde was from the middle to the bottom. Actually, it was hard to recognise Katie due to that transformation. Try to guess who it is 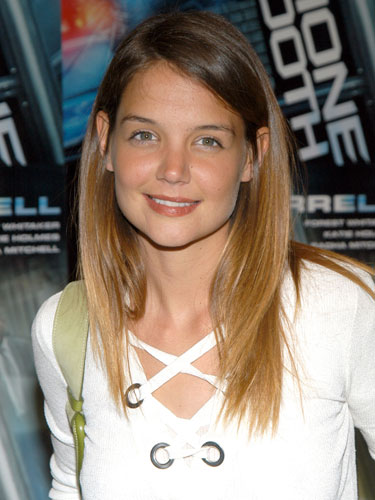 7. In 2004 Katie wore straight hair, a bit up on the top. Maybe, the actress got tired of her curls and wanted to try something different. Anyway it was great 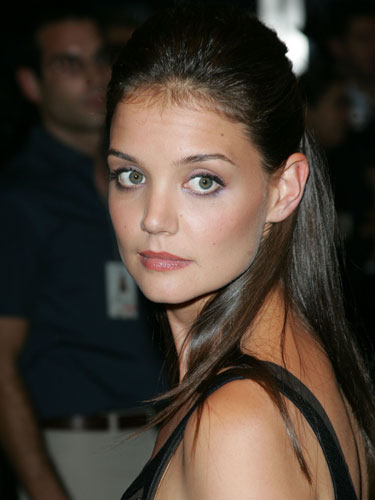 Katie Holmes with a straight hair

8. Despite having natural curles, in 2005 Katie Holmes preferred to have her hair curled in loose waves. It made her look like a Disney princess. Together with Ton Cruise they made an incredible couple 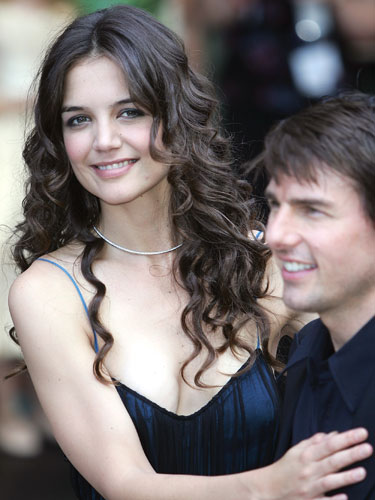 Katie Holmes preferred to have her hair curled

9. In January 2008 Katie appeared in a quite cardinaly different image.

She changed her always long hair for a neglected casual short haircut. She looked a bit girlish in such image, but still it was nice and unexpectedly. It’s often said if you want to change your life change your hairdo. So if you need a hint, here it is 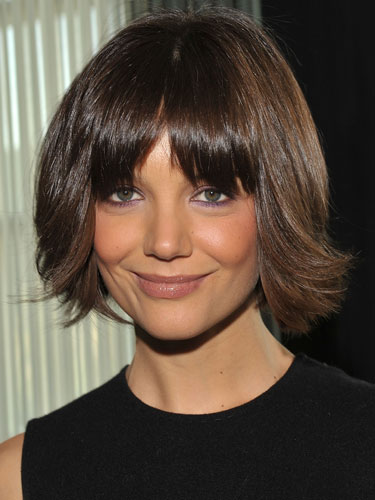 10. In summer the same year, Katie impressed the audience even more.

When we thought that her hair can never be shorter than it was, she proved the opposite and appeared with a short haircut with bangs that framed her hair 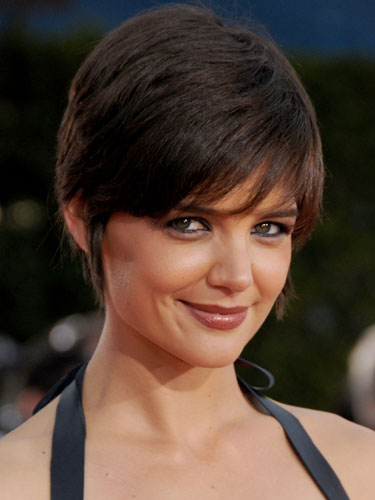 11. Katie Holmes is a happy owner of nice hair that grows up very fast.

In 2010 she appeared with already shoulder-length hair. In addition the length, the hair was shining and was perfectly curled. Later on, her hair was growing longer and longer.

Finally, if you follow Katie these days you can see her with again shoulder-length curly hair. But this time it’s not for a public image, it’s a change for the role in a new film. She looks very attractive. 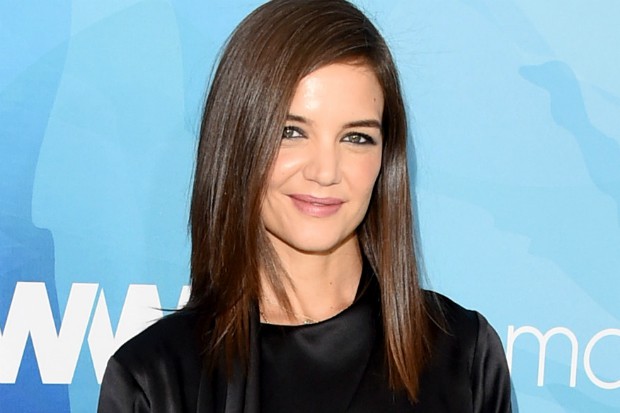 He have nothing to do but guess whether Katie will cut her hair again or will let it grow longer.